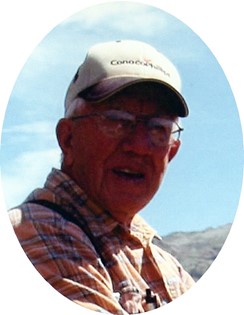 Guestbook 6
A Memorial service for L. Clarke Van Vleet, 94, will be held at 10:00 a.m., Saturday, January 4, 2020 at Davis Funeral Home. Military graveside honors will be accorded by the Friday-Truan Detachment #683 Marine Corps League & Veterans at Mountain View Cemetery. Memorials to the Friends of Hospice (Frontier Hospice) in care of Davis Funeral Home will be appreciated.

He was born on November 10, 1925 in Hudson, Wyoming, son of Eugene L. and Edith (Harvey) Van Vleet. He grew up in the Sand Draw area and attended school in Riverton, graduating in 1944. Clarke served in the United States Army from 1944 until 1946 during World War II. On September 1, 1947, he married Dorothy J. Hardman in Lander, Wyoming.

Mr. Van Vleet worked for White Hitching for a year and then started his 41 year career with Northern Utilities, which later became Kansas Nebraska Gas as a compressor mechanic. Clarke and Dorothy were active members of the Evangelical Free Church of Lander.

Mr. Van Vleet enjoyed playing cards, fishing, hunting, and riding 4-wheelers. In his later years, Clarke enjoyed playing cribbage with his friends in Riverton every Tuesday at the Senior Center.

He was preceded in death by his parents, Lester and Edith; 2 sisters, Emma and Delores; brother, Lyle Van Vleet.