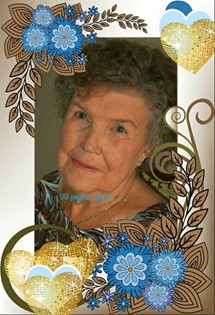 Guestbook 7
Mildred A. Haller, 93, formally of Riverton passed away on December 21, 2019, at the Apache Junction Heath Care in Apache Junction, Arizona. A funeral service will be held at 10:00 am on Monday, January 6, 2020, at Davis Funeral Home with burial to follow at Mountain View Cemetery.

Mildred A. Burchfield was born on August 5, 1926 in Dodge City, Texas to Alfred James and Opal May (Tyler) Burchfield. She grew up and attended schools in Dodge City with her siblings.

Mildred was Baptized and a member of the Assembly of God Church in Salt Lake City, UT

She also belonged to the Moose Lodge in California and the V.F.W. Auxiliary in Riverton.

On October 17, 1943 Mildred married Albert Jackson Allen in Oklahoma. They lived in Texas until 1951 when they moved their family to California. Together they had three children, Albert, Cynda, and Troy. In December of 1974, Mr. Allen passed away, Mildred stayed in California until 1991 when she moved to Riverton, Wyoming.

Mildred married her second husband, Sam Haller, on August 19, 1990 in Las Vegas, Nevada. They lived in Riverton until Mr. Haller passed in 1999, she then moved to Utah. Mildred later moved to Arizona in 2010, where she lived until her passing.

She enjoyed crocheting and was considered a “neat freak” by her family. Above all Mildred loved her children and all of her grandchildren, greats and grea,t greats.