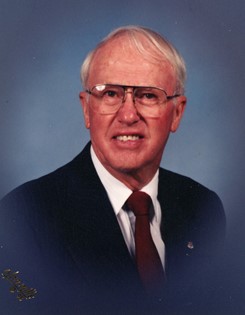 Services are Saturday, January 11 at 10 A.M. at the Riverton United Methodist Church, where he was a longtime member. Rev. Echo Klaproth, officiates.

Ned LeRoy Case was born January 9, 1922 at Casper, Wyoming, the youngest son of George E. and Ola (Patchen) Case, answering to the family nickname of “Jiggs” in early years.

Mr. Case attended Nebraska schools until his family moved to Pavillion, Wyoming from Scotia, Nebraska, in 1936. He attended Pavillion schools and graduated high school there in 1940.

He married his high school sweetheart, Betty Jean Starks, in 1942, in Casper where he had just graduated machinist school. Their son, Gene Allen, was born in 1944.

The family farmed in the Pavillion area for 10 years, then moved to Laramie where Ned earned his Bachelor of Science degree in Agronomy at the University of Wyoming in 1957. He was a member of Alpha Zeta Honor Society.

In 1960, he joined Phillips Petroleum Company as Director of Agronomy in their corporate offices in Bartlesville, OK for the next 23 years. There he worked with universities across the nation, with foreign assignments to Brazil for Phillips, and in retirement, to Colombia, South America for The World Bank, conducting soil fertility research. He received the Soil Fertility Achievement Award from Oklahoma State University for his service and support of educational programs.

Mr. Case returned to Wyoming to retire in 1982 at Pheasant Crest Farm near Midvale for nine years where he and Betty hosted many family, church and neighborhood gatherings. There his love for the outdoors was fulfilled in camping, hiking, fishing and gardening, along with playing “Grandpa” to great nephews Matt and Clint Davis .

In retirement, Ned wrote a book titled, “A Search for Something Better,” a story he’d heard told and re-told of his family’s trip by covered wagon from Casper, Wyoming to a property in Missouri and back, when he was a baby. His family treasures the story.

From his father, he learned good carpentry and loved adding improvements to his family’s homes.

A longtime member of the Pavillion Community Methodist Church, Ned helped with remodeling, social functions, and served a term as board president where he guided the steel siding project for the church and fellowship hall. He and Betty moved to Riverton in 1990, where he was employed for three years at Central Wyoming College.

Mr. Case was a member of the United Methodist Church of Riverton, lifetime member of the American Society of Agronomy, served as chapter president of AARP, served on the state AARP board, four years as a Gideon distributing Bibles, president of the Fremont County Hay Producers, and several other community contributions.

His life interest and effort helped to provide food and shelter for humanity and the natural world. Wherever he lived, gardens, evergreens, fruit trees and flowers light the spaces he left behind.

Ned loved this Earth and the Earth loved him back. Betty called him “Johnny Evergreen.”

Memorials to the Riverton Hospice Home would be deeply appreciated.