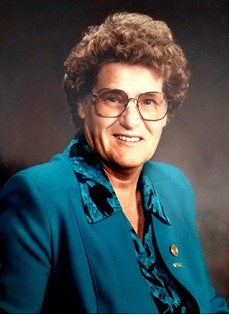 Guestbook 7
Jane Louise Wood Napier passed away at her home in Riverton, Wyoming on January 24th, 2020, surrounded by her family.

Jane Thompson was born September 8th, 1930 in Riverton to Joe Thompson and Anna (Sutter) Thompson, the 5th of 8 children. She was raised on the family sheep ranch where she learned an unmatched work ethic. She told many wonderful stories of sheep camp, including how she started drinking coffee at the age of 8 as the water was undrinkable on the homestead.

She graduated from RHS in 1948. She attended the University of Wyoming and taught in rural elementary schools in Hiland and Divide. William Doyle Wood hung around the school house until she married him on September 12th, 1951. They raised four daughters while living and ranching in various locations in Wyoming, including Hiland, Ten Sleep, Worland, and Grass Creek, ultimately settling on a small ranch between Riverton and Shoshoni. She was the epitome of adaptable. She could make a home from a mouse-infested dwelling, often with no running water, sewed her family custom clothing without patterns, killed rattlesnakes and badgers (and other duties as assigned), and could buck hay bales with the strongest of men. Jane moved to Riverton when Doyle passed away.

She married Max Napier on September 10th, 1979. They enjoyed traveling, especially to Hawaii and Arizona. She was a devoted caregiver of Max until he passed away of Parkinson’s and Alzheimer’s.

Jane was an active member of the community for decades. She was an avid bowler and long-time member of D.O.E.s, VFW Auxiliary, and Hillcrest Baptist Church. She also was a talented gardener and could most often be found in her large vegetable garden or tending her beautiful irises and tulips. Her house could be identified by most in town as “the house with the tall corn”. She also owned and operated the Shaved Ice Barn, which provided employment to Riverton youth, including her grandchildren.

After she “moved to town” she worked at the Print Shop, the Advertiser, and retired from the postal service at the young age of 75. Along the way she met many people who became friends. Jane had an innate ability to find the good in everyone. She accepted everything life gave her with grace and sensibility.

She is survived by her daughters Janie Kohler (Ron) of Riverton, Beverly Bennett (Todd) of Gorham, Maine, stepson Bob Wood (Kay) of Salt Lake City, grandchildren Kurt Kohler (Lauren) of Spokane, Kristi Racines (Torey) of Cheyenne, Trevor and Emily Bennett of Gorham, along with great-grandchildren Raquel, Evelyn, and Ben of Spokane, and Addie and Theo of Cheyenne. She is also survived by stepchildren Ron, Harry (Rick), and Connie Napier, her sister Anita (Claude) Hashberger of Riverside, CA, and her sisters-in-law Lavonne Pollard of Riverton, Mona Thompson of Billings, MT, and Dorothy Thompson of Shoshoni, along with numerous nieces and nephews.

Jane was preceded in death by her parents, her husbands, her daughters Billie and Peggy Wood, and her siblings Anna Ruth Weber, Joe Thompson, Jim Thompson, May Stewart, Jack Thompson, and Shirley Carpenter.

A viewing will be held Tuesday the 28th at Davis Funeral Home from 5:00 p.m. to 7:00 p.m. Memorial services will be held at 10:00 a.m. Wednesday, January 29th, at the same location with burial to follow at Mountain View Cemetery. Memorial contributions may be made to Help for Health Hospice, at which Jane volunteered, and whose staff provided comfort and care to her and her family in her final days.