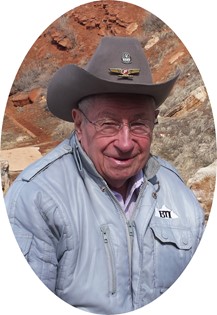 
Roger Coburn passed from this life to the next on January 25, 2020 while in his home surrounded by his family. He began life in Heckla, Brown, South Dakota as the first born to Hannable “Bud” Clark Coburn and Lydia Fetzer on September 23, 1927. One brother remains; Gary Jay Coburn (Ginger) of Portland, Oregon area. Other siblings who preceded him in death are, Darwin Clark (Frankie), Kenneth Eugene (Rosemarie) and sister, Janice Fay (Rowell). As a young boy he loved to hunt and was a guide for those who sought to hunt pheasants. He frequently out shot those he guided.

Roger was honorably discharged from the Army after serving in WWII as a sergeant assigned to the 25th Quartermaster Company stationed in Japan for one and a half years. It was there his first experience began in truck driving. Returning to Wyoming he met Fara Jean Kilfoy in Lander and married her July 1, 1950 in Riverton. Together they raised four children; Rhonda Donathan of Riverton, Ron Coburn in Casper, Valerie Jevne (Randy) of Riverton, Clara Ortiz (Kelly) in Buffalo.

Roger supported the family in various professions which started with employment by his father-in-law in the oil field. He then tipped bits “welding” at Superior Bits, plumbing for Fremont Plumbing and several local trucking corporations. Those who employed Roger for his truck driving skills included; Ferrell Brough Trucking, Gilpatrick Construction and Bonneville Transit Inc. No speeding or traffic citations were issued in his name during his life time. His most monumental work was beside his wife as they built up small cabins into sizable units on the corner of 8th and West Main in Riverton to create the Mountain View Motel. This they remodeled, added to and maintained for fifty-one years. Over the years they created many friendships serving others, turning a business into a home for commuting families.

Leisure time included family vacations and boating at Ocean Lake. Bowling with his buddies took him to several national tournaments. He also enjoyed coin collecting. When he could he would hunt pheasants or lake fish.

Services will be held at Davis Funeral Home February 1st at 2 p.m. with interment following at the Mountain View Cemetery. Immediately following, a dinner will be served at the Silver Spur Steak House at the corner of West Main and Hill Street in Riverton.