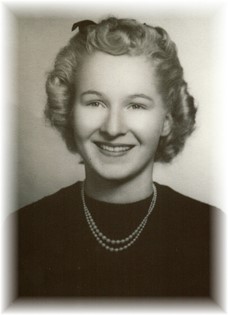 Guestbook 2
Former Riverton resident Maybel E. Hitshew of Douglas died on Saturday, Sept. 20, 2008, at the Douglas Care Center. She was 79. Funeral services will be at 2 p.m. Wednesday, Sept. 25, at the Davis Funeral Home of Riverton with the Rev. Mark Thurman of the United Methodist Church will officiate. Interment will follow at Mountain View Cemetery in Riverton. Maybel E. Thomson was born in Douglas on Oct. 16, 1928, the daughter of Catherine Ina (Gentry) and Rod Thomson. She grew up on the family ranch and attended high school in Douglas, being graduated with the Class of 1946. On April 4, 1948, she married William O. Hitshew. They had three children -- Linda, Kirby, and Tracie. They made their home in Keeline, Douglas, Crowheart, and then Riverton. She worked here for several years for Chopping Motors. Mrs. Hitshew's hobbies included her yard, garden, and flowers. She refinished furniture and did upholstery, was an accomplished seamstress, and enjoyed quilting. Her family said she loved her family, her home, and her pet dog, Sparky. The couple moved to Glenrock in 2000. Ill health forced them to move to Michael Manor in May of 2001. Mr. Hitshew preceded her in death on June 19, 2002, after 54 years of marriage. Survivors include her daughter, Linda Vigil and her husband Steve of Elko, Nev.; two grandsons, David Aldrich of Escondido, Calif., and Dustin Robinson of Colorado; one great grandson, Shombie Robinson; a sister, Genevieve Wagoner and her husband Don; brother, David Thomson of Douglas. She was preceded in death by her parents; her husband; son, Kirby in 1972; daughter, Tracie in 1978, and a great grandson, Zane Robinson. Memorials may be made to the Alzheimer's Foundation in care of the Davis Funeral Home, 2203 West Main, Riverton, WY 82501. On-line obituaries are available and condolences for the family may be made at: thedavisfuneralhome.com Services are under the direction of the Davis Funeral Home of Riverton.