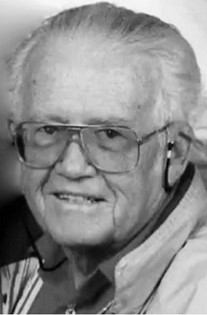 Guestbook 0
William F. Porter, a sixty year resident of Riverton, Wyoming, died January 14 after a year-long struggle with dementia. He was 95 years old.

He was born in Enid, OK on October 4, 1924 to Francis N. and Elizabeth (Cunningham) Porter. After high school in Pratt, KS, he entered the US Marine Corps. He took part in the battle of Iwo Jima, and then the occupation of Japan.

After the birth of sons, Dean and Kim, the family was transferred to Alberta, Canada for four years. They then moved to Wyoming, where son Jeff was born, and settled permanently in Riverton in 1959.

Bill served on the Riverton City Council from 1967 to 1972 and again from 1987 to 1992. He was a mainstay of the Lions Club, serving as secretary for many years, and participating in all of their community activities. He was inducted as a member of the Wyoming Lions Hall of Fame, among other honors.

He enjoyed golf, working on home and automotive restoration projects, and searching for fossils and arrowheads which he polished and mounted for display. After retirement, he and Diane traveled with friends to many places in the US and abroad. He competed in the Wyoming Senior Olympics, winning medals in table tennis and golf. He was active in the local chapters of the Wyoming Archaeological and Historical Societies and enjoyed many field trips with them.

He was preceded in death by his wife, Diane, and also his brothers, James, Robert, and Joseph.

He is survived by son, Dean, Kim, and Jeff, and granddaughters, Kaylee and Michelle.

Memorial services are pending at this time.