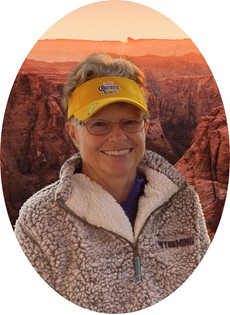 Lynn Rochelle Eells was born in Riverton, WY on March 27, 1952 to Robert “Bob” Dewayne and Lorretta May (Palmer) Eells. She attended schools in Riverton and graduated from Riverton High School with the class of 1970. She then went to college in Sheridan. She moved to Denver for a few years and then to Casper. She lived in Casper for many years then returned to Riverton where she raised her family.

While in Casper, Lynn worked as a dispatcher where she met her future husband, Mark Romer. They were married on June 9, 1979 in Casper, WY. Together they had two children, Brandon and Nikki.

Lynn worked as a dispatcher, an aide at Lincoln School, was instrumental in the family business, Chopping Motors Lease Inc,, but her most important job was Mom which her children said she was the ultimate Mom and Grandma.

She enjoyed gardening, genealogy, being in the mountains, spending time at the family cabin, and traveling as long as she didn’t have to drive. She belonged to Xi Pi Chapter of Beta Sigma Phi Sorority and Daughters of the American Revolution. She loved her children and grandchildren and never missed an activity or sports event that they were in. She made many sacrifices for her children and grandchildren, she was always there for them no matter what. Lynn was the best friend, and she was always the first one there for everyone doing what needed done, she was selfless.

She was preceded in death by her parents, Robert “Bob” and Loretta Eells.