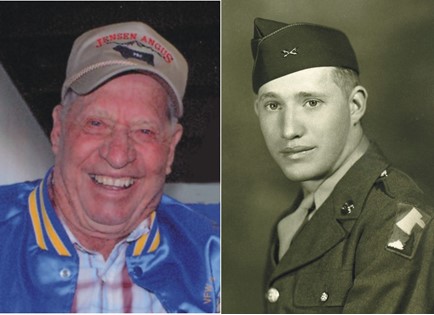 Guestbook 6
Frank Sabo, Jr., 95, of Hudson, Wyoming passed away on Monday evening, February 3, 2020 at Westward Heights Care Center in Lander. A funeral service will be held 11:00 am on Monday, February 10, 2020, at Davis Funeral Home in Riverton. Interment will follow at the Hudson Town Cemetery will full military honors. Memorials may be made to the Local VFW #954 in care of Davis Funeral Home, 2203 W. Main Street, Riverton, WY 82501

Frank Alphonse Sabo, Jr. was born on January 30, 1925 in Paposia, Wyoming (Hudson Coal Camp) to Frank A. and Amy Josephine (Latinis) Sabo. The family moved to Thermopolis where Frank attended school through the 2nd grade. In 1933 the family moved to Superior, Wyoming where he graduated high school with the class of 1943.

After high school he entered the U.S. Army serving in World War II with the 246th Field Artillery Battalion as Sergeant. He served in the Asiatic Pacific Theater and the Philippine Liberation Service being honorably discharged in 1946.

After Frank was discharged in 1946 his army buddy and best friend invited him on a blind date where he met the love of his life, Elia Marie Munari in Superior, WY. Frank and Elia married on January 21, 1950 in Rock Springs, WY. They lived in Superior for two years before moving to Hudson, WY. Here they made their forever home raising their two daughters, Amy and Cindy. The couple were married 68 years before Elia passed in 2018.

Frank worked at A.D. Martin Lumber before going to the U.S. Steel Iron Ore Mine where he worked until he was forced to take a medical retirement from an injury.

He enjoyed fishing, hunting, camping, and traveling with friends in their motorhome. He loved getting to see all of his great-grandchildren. He and Elia followed their girls, then grandchildren, and later great grandchildren to all of their events all over the state.

He was preceded in death by his wife, Elia Marie Sabo; and parents, Frank and Amy Sabo.

Services are under direction of The Davis Funeral Home.