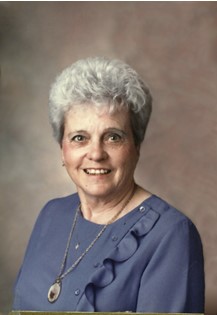 Guestbook 4
A celebration of life for Margaret Stoll of Riverton will be from 2 to 4 p.m. on Wednesday, Sept. 24, at Big Wind Hall at Crowheart. Private family memorial services will be held that day at St. Helen's Episcopal Church in Crowheart. Mrs. Stoll died on Sunday, Sept. 21, 2008, at her home in Riverton, surrounded by her sons and daughters. She was 88. Margaret I. McFarland was born in Glenrock on July 13, 1920, the daughter of Audrey and Esther (Watters) McFarland. She attended schools in Glenrock, being graduated in 1937. On April 1, 1938, she married James Stoll at St. Thomas Episcopal Church in Dubois. They lived in and around Crowheart and Dubois until 1973 when they moved to Casper where Mr. Stoll managed the Eight Mile Ranch. Mrs. Stoll held various jobs during that time, including cooking for the Crowheart School, Red Rocks, and running the Oregon Trail Café in Farson. She also worked at Bailey School Supply in Casper, retiring in 1986. In 1986, Mr. and Mrs. Stoll retired, to return to the Kinnear area to be closer to their children and grandchildren. Her family said Mrs. Stoll was known for her cooking and organizing family holiday dinners. She enjoyed reading, crossword puzzles, and gardening. Survivors include daughters, Claudine Gardner and her husband Dave of Shoshoni, and Pattie Jo Baker and husband Larry of Pavillion; sons, John Stoll and wife Kaye of Crowheart, and Gary Stoll and wife Candace of Douglas; grandchildren, Greg and Barb Gardner of Lysite, Bret and Laurie Gardner of Shoshoni, Kelly and Kim Gardner of Shoshoni, Toni and James Downing of Crowheart, John Paul and Kara Stoll of Pavillion, Todd and Denise Stoll of Elko, Nev., Tyler Stoll of Douglas, Koreen and Jarrod Rapp of Ethel, Mo., Tania and Brian Dion of Riverton, Robyn and Jeff Swanson of Lander; two great grandchildren; sisters, Sandra Knigge, Lois Ann Meade, and brother, Frank Meade. Mrs. Stoll was preceded in death by her husband, parents, a brother, and a sister. On-line obituaries are available and condolences for the family may be made at: thedavisfuneralhome.com Services are under the direction of the Davis Funeral Home of Riverton.