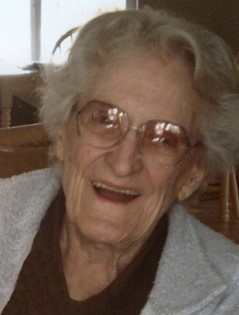 Guestbook 7
Graveside services for long-time Riverton businesswoman Martha Dale will be at 10:00 a.m. Friday, Sept. 26, at Mountain View Cemetery in Riverton. The Rev. Father Andrew Duncan will officiate. Mrs. Dale died Monday night, Sept. 22, 2008, at Wind River Healthcare in Riverton at the age of 91. Martha Raicevich was born in Buhl, St. Louis County, Minn., on Oct. 21, 1916, the daughter of George S. and Petrana "Pearl" (Stankovich) Raicevich. The family lived in the Mesabi Iron Range where her father worked in the iron mines. She had two brothers and a sister-- Milorad, Alex, and Ida. She was baptized into the Serbian Orthodox Church in Minnesota. In July of 1926, the family moved from Minnesota to Gebo, Wyo., where her father worked in the coal mines. The four siblings attended school at Gebo. She was graduated from Gebo High School in 1935 and attended Barnes Business College in Denver, Colo., for six months. She returned to Wyoming and worked at the Manhattan Café in Thermopolis from 1936-1937. She married James Franklin Dale on Oct. 6, 1938, and they lived on a ranch outside of Riverton from 1938 to 1946. They moved into Riverton in 1946 and Mrs. Dale worked at Trego's Book Store from 1946 to 1951. She worked at the Teton Hotel for 10 years -- 1951 to 1961. In 1961, Mrs. Dale went to work at the Thunderbird Motel in Riverton, later purchasing an interest in the motel and continued working there until her retirement in 1997. Mrs. Dale was a past member of the B.P.O.Does and the local hospital board. She was a past director of the Wyoming State Liquor Dealers Association and a charter member of the Riverton Country Club. Her family said she had a strong work ethic and enjoyed working. Her family and her Montenegrin heritage were very important parts of her life. She enjoyed socializing with friends in her later years. Survivors include Mr. Dale’s grandsons, Bret Dale and his wife Cathy and Brad Dale and his wife Connie, all of Riverton; a brother, Alex Raicevich and his wife, Doris, of Spokane, Wash.; nephews and nieces, John Raicevich, Alexis Chasse, and Debra Wheeler, all of Spokane, Wash., Mike Raicevich of Thermopolis, Shelley Deromedi and her husband Jerry of Kirby, Patricia Dickeson and husband Truman of Chugiak, Alaska, Marta Hartman and husband John of Cheyenne, Alex Johnson and his wife Cheryl of Casper. She was preceded in death by her parents; her husband, Jim Dale, on Oct. 28, 1984; his son Brad Dale; a brother Milorad Raicevich and his wife Jo, and sister, Ida Harrison and her husband Ed. Memorials may be made to a charity of the donor's choice, in care of the Davis Funeral Home, 2203 West Main Riverton, WY 82501. On-line obituaries are available and condolences for the family may be made at: thedavisfuneralhome.com Services are under the direction of the Davis Funeral Home of Riverton.