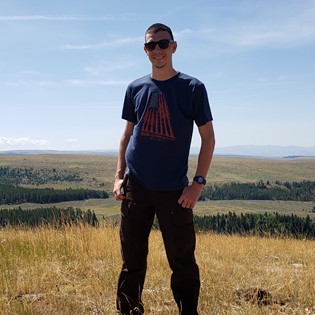 He attended school in Deepwater, MO until his family moved to Riverton, WY in 2015. He was a current junior attending Riverton High School. Drew was a state medalist in swimming as well as a letterman in sports. Drew was always cheering on everyone else; he would go out of his way to cheer on every team member during their races. Drew was a strong team leader in cross country who really helped bring the 2019 Cross Country team together. Drew was also an academic letter winner. Drew was an exceptional student who was insightful and genuinely interested in learning about any subject. Supremely polite and conscientious, he showed great care in his work and high regard for his teachers and peers. He had beautiful cursive handwriting and a gentle way of speaking that made him deeply endearing. Because of his academic excellence and rich character, he was inducted into the National Honor Society last fall. Drew attended Wyoming High School Institute summer of 2019 at the University of Wyoming; the students attended specialized classes. Drew lived, studied and built everlasting friendships during his stay in Laramie. Drew had a desire to become an Occupational Therapist specializing in childhood concussions. He wanted to give back to a cause that was dear to his heart and honor his brother. Drew also earned his Eagle Scout Award and truly believed in doing a good turn daily. He was a member of Heart of America – BSA, where the mission is to prepare young people to make ethical choices over their lifetimes.

Drew loved spending time outdoors hunting, hiking and fishing as well as reading. He also had a love for his family, especially his brother and best friend, Nate, who was also his biggest supporter in life, and his dog Remi. Drew loved his friends. They knew Drew to be a kind and caring person who always tried to be upbeat and positive and enjoyed a good pun.