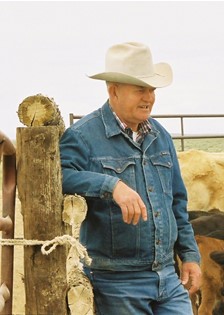 Graduate of Riverton High School in 1958, Charles was the student body president; he participated in football and basketball. He also attended the University of Wyoming. His love for sports continued as he enjoyed watching his grandchildren through their activities. Weekend afternoons would often have a Riverton High School or University of Wyoming game on the radio.

He married Alice M. Sutton in June of 1960, although they later divorced, they remained lifelong friends. Together they raised two sons, Robert and Joseph.

Upon returning from college, Charles took over daily management of Crofts Sheep Company, which was in operation until 1982. Upon the death of his father, Charles moved to town to provide full-time home care for his mom.

Charles looked forward to every 4th of July and the Pioneer Days Parade in Lander and during the Christmas season hosting friends and family for Tom & Jerrys. Additionally, he enjoyed his daily walk throughout Riverton, to which most Riverton residents would recognize his dedication to this activity. He often shared his appreciation for the generosity of his neighbors who shared goodies, fish, fresh garden produce, stories and genuine friendship.

Charles had a true love for the land. He lived and worked in early ranching, encompassing open range from the lower Wind River mountains to east of Riverton. He knew every camp, every water hole and every neighbor in between.

Charles was involved and supported his children and grandchildren in their ranching opportunities. Although a sheep man at heart, he looked forward to attending brandings, turn out, weaning, shipping and any opportunities to look at the range while sharing his knowledge to ensure a successful transition…and wonder what time is lunch.

Visitation is scheduled for Friday, February 28, 2020 from 12:30pm – 2:00pm at Davis Funeral Home with funeral services immediately following. You are invited to a celebration of life following services at the Riverton Elks Club. Family has planned internment at Mount Hope Cemetery in Lander at a later date.