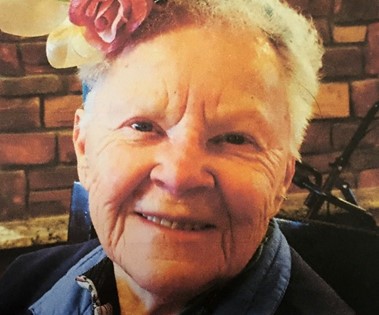 Guestbook 13
Vesta Caroline Hutchison, of Dubois, died Saturday, March 14, 2020 at the Wind River Rehab and Wellness in Riverton, Wyo. surrounded by love. She was 88 years old.

A private family service was held Wednesday, March 18 at the Dubois Cemetery.

Vesta Caroline Geike was born March 17, 1931 on the family farm North of Harrison, Neb. to Henry August and Orpha Lillian (Keebler) Geike. She attended country schools for five years and school in Harrison for three years where she lived for 17 years.

On June 14, 1949, she married Josef F. Hutchison in Jackson, Wyo. The couple had three children– Robert, Linda and Audrey.

Mrs. Hutchison lived in Dubois for over 61 years and was a hard-working, generous person actively supporting the polling booths and was a member of the VFW Auxiliary in Dubois. She was active in her community and made friends everywhere she went. She worked for the Dubois school system for over 20 years.

The Hutchisons enjoyed outdoor activities including traveling in their fifth wheel and seeing the world on cruise ships. Mrs. Hutchison enjoyed being outdoors in God’s country in activities that included metal detecting and was part of the original snowmobile groups. She enjoyed country music, playing cards, gardening and was an avid walker.

She was preceded in death by her daughter, Audrey L. Long; her husband, Josef F. Hutchison, in 2001; parents Henry and Orpha Geike; and four brothers.

Memorials or donations may be made to the Dubois Ramar Brown VFW Post 10056 or the High Country Senior Center in care of the Davis Funeral Home, 2203 W. Main Street, Riverton, WY 82501. The family requests no flowers.

Online condolences for the family may be made at theDavisFuneralHome.com.

Services were under the direction of the Davis Funeral Home.