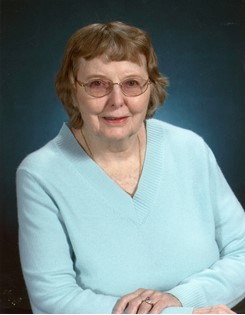 Alma Louise Redding was born on September 22, 1925 in Lander, WY to Michael W. and Louise (Close) Redding. She grew up with her three brothers in rural Lander. She helped her father on their 10 acre truck garden on what is now Chittim Road, often accompanying her father as they delivered fresh vegetables by horse and wagon in the area. She graduated from Fremont County Vocational High School with the class of 1943. In 2011 she was inducted into the Lander Valley Education Foundation Alumni Hall of Fame.

Alma was a member of the First United Methodist Church in Lander and volunteered at the Methodist Thrift Shop.

On January 1, 1945 Alma married Jule E. Nicol in the same home she grew up in. They lived there more than 20 years before moving to the ranch between Hudson and Lander. They raised three children, Peny, Mike, and Patric. Alma and Jule were married 62 years when Jule passed away in April 2006.

Alma was proud of and loved her home town, volunteered and held leadership positions in many organizations over the years including: 4-H, Girl Scouts, PTA, Extension Homemakers, Fremont County School District 1 Board, Parks and Recreation Board, Chamber of Commerce Board of Directors, Wyoming Council for the Humanities, American Legion Auxiliary, NOWCAP Board Member, Board for Care & Share Food Bank, Senior Center Foundation Board, and Fremont County Pioneer Association Board.

In 1978, Alma was named Community Woman of the Year by the local Chapter of Business and Professional Women. In 1979 she was appointed by Governor Ed Herschler with Senate confirmation to the Community College Commission representing Central Wyoming College District and in 1983 she was elected their Chairman. Alma ran for Wyoming State House of Representatives in l978 and then for a Senate seat in 1980. She was not successful either time but lost “only by a couple hundred votes, not bad for a Democrat” – quote from Alma.

Memorials may be made to Museum of the American West “Nicol House”, Help for Health Hospice, or “Ice Cream Machine” for Westward Heights Care Center in care of Davis Funeral Home, 2203 West Main Street, Riverton, WY 82501.