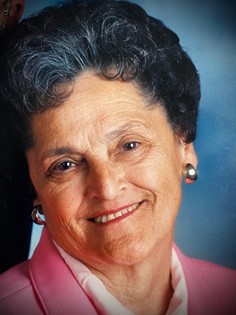 Carmela “Mel” Ratliff was born on March 5, 1925 to Pasquale and Rose Albanese in Providence, R.I. The youngest of 6 siblings, Mel grew up in Providence, attending school until eighth grade, when she left school to work designing clothes.

In 1945, Mel met the love of her life, Eugene “Gene” Ratliff. After Gene left the Navy in 1947, they were married in Providence. They lived in Providence for a short time, where both of them worked in jewelry factories.

In 1952, they moved to Riverton, WY to be near Gene’s family, where Mel continued to live until 2016. Mel and Gene were almost never apart, and became very involved in their church. Mel continued to work at retail stores around Riverton until 1967.

In 1962, Mel and Gene were baptized into the Christian faith at Hillcrest Baptist Church. Mel served as church hostess for many years, and was a member at the time of her death.

Mel and Gene were known to always have children at their house, but it wasn’t until they had been married 20 years that they were able to adopt one of their own, Lori Ann. Lori Ann brought incredible joy to their lives, and their lives revolved around her.

Mel was a long time resident of Riverton until she had a stroke in 2017. At that time, she moved to Colorado to be near her daughter and her family. She resided at Life Care Center of Littleton, CO at the time of her death, March 15, 2020.

Mel is preceded in death by her husband of 61 years, who passed away in 2009. She is also preceded in death by her 5 siblings; Louise (Albanese) Smith, Rose (Albanese) Johnson, Tommy, Johnny, and Henry, as well as her parents, Pasquale and Rose Albanese. Her in-laws, Alfred and Mildred Ratliff, her sisters-in-law, Gwen Jacoby and Rachel Ratliff, as well as her brothers-in-law, Bill Althoff and Jack Ratliff preceded her in death.

Mel is survived by her daughter, Lori Ann and husband, Doug Williams. Grandchildren include Cristina (Williams) Buonanno, Logan Williams, and Caleb Williams, as well as adopted granddaughters Chelsie (Betts) Flinn and Jaime (Betts) Lunbeck. Mel is also survived by numerous nieces and nephews, and many friends who loved her dearly.

A memorial service will be held at a later date. Cremation has already taken place.