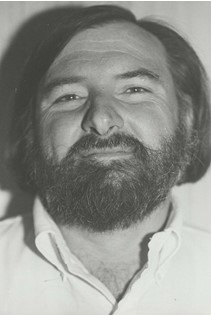 Andrew Jackson Deering II was born in Fairfield, Ohio, on October 16, 1947, to Homer Lee Deering and Mary Helen “Susie” (Wilkerson) Deering. He contracted polio at age one and was their only child.

Andy attended kindergarten in Connersville, Indiana. From there the family moved to Prescott, Arizona, and then to Flagstaff, where Andy graduated from Flagstaff High School in 1965, and from Northern Arizona University in 1969, receiving a B.S. in Biology, after first majoring in Creative Writing.

While at NAU, he was a member of the Shrine of the Ages choir, singing in the Easter Sunrise Service at the South Rim of the Grand Canyon.

On February 18, 1975, in Flagstaff, he married Carol Louise (Hinckley) Deering, whom he met while they worked at the public library there.

In Winslow, Arizona, in the mid-1970s, Andy was Director of the Roxanne Whipple Memorial/Navajo County Library. In Tucson, Arizona, Andy graduated with a Masters in Library Science (MLS) from the University of Arizona in 1979. In Washington State, he was a librarian with the Mid-Columbia Libraries, Kennewick Branch, from July 1979 through August 1983.

He and Carol moved to Riverton, Wyoming, where Andy was hired as the Fremont County Libraries Branch Librarian; he worked there from 1983 through 1995. From 1995 through 2012 he was an adjunct instructor at Central Wyoming College, teaching several subjects.

In April 1986, Andy was appointed by Governor Herschler to the Wyoming Humanities Council Board and enjoyed serving there. He collected railroad-watches and pocket-watches. (His article “The Railroad Watch” was published in American Heritage in 1993). He also collected fountain pens. (His story “The Lost Pen of Percival Lowell” won the first Pentrace Writing Competition.) Andy collected rhinoceros keepsakes, and supported wildlife and human rights.

Andy was preceded in death by his parents. He is survived by his wife and their son, Brandon, Kristina, and two grandchildren.

A Celebration of his life will take place at Davis Funeral Home on Monday June 28 at 2 p.m. Arrangements are under the direction of the funeral home. Cremation has taken place.

Online condolences may be made to the family at www.The DavisFuneralHome.com.

Memorials may be made to Doctors without Borders, or any wildlife or environmental cause.