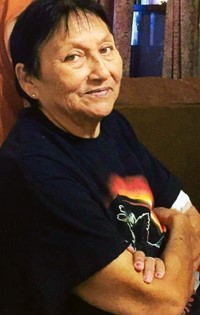 Guestbook 5
Traditional Native American Services for Donna Faye Harris Antelope, 60, will be held at 10:00 a.m., Monday, April 6, 2020 at Yellowcalf Cemetery in Ethete, WY. A Prayer service will be held Sunday evening at the family home 101 Sagebrush Dr. at Beavercreek Housing.

Mrs. Antelope passed away on April 2, 2020 at Wyoming Medical Center in Casper, WY.

Donna, whose Indian name is “Stands in a Clean Spot”, was born June 3, 1959, in Riverton, WY to Marvin and Irene (C’Bearing) Harris. She attended elementary school at Hamilton Dome, WY before graduating from Lander Valley High School in Lander, WY in 1977. She then attended Haskell College. Donna loved children and babysat children of several Wyoming Indian School employees. She worked at South Federal Inn in Riverton, American Dry Cleaners in Lander and most recently was employed at the Wind River Hotel and Casino for 11 years in the Wardrobe Department.

Donna enjoyed the company of all her grandchildren, gambling, at the Wind River Casino, and also enjoyed music of Diana Ross and the Supremes. As a young girl, Donna played fast pitch baseball for the Lander Baseball Assoc. She enjoyed traveling to Pow Wows, as well as spending time in the mountains and loved to sew.