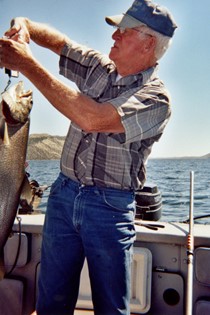 Robert Anderson Mayo was born on August 30, 1936 in Coleman County, Alabama to William Hobert and Mamie Mable (Basinger) Mayo. He was raised with five brothers and one sister, he was the last of seven. When Bob was sixteen years old he and his brother, Tom, hitch hiked to Wyoming. They ended up in Casper, WY. Where he met his wife Anna Laurie Franklin. They were married on July 20, 1957 they were married 61 years. Together they had three children, Valorie, Laurie, and Robert, Jr. His wife Laurie passed on July 31, 2018.

Bob was the Mill Superintendent at Path Finder Mine when he retired.

Bob was an outdoors man that loved fishing, elk hunting, water skiing, and bowling. Above all he loved his family dearly and spending time with them was always his best times. He was a man with a lot of integrity.

He was preceded in death by his wife, Anna Laurie Mayo; five brothers, one sister, and his parents.