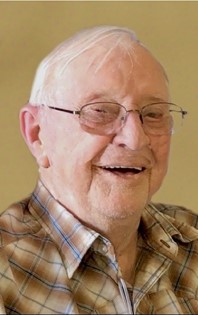 Guestbook 2
Calvin Lewis Olson, age 86 of Newell, SD, was welcomed home by Jesus on April 17, 2020. Calvin was born to Arthur and Jessie Olson on August 3, 1933 in Callaway, NE. He had one brother, Alvin (Sparky) Olson of Riverton, WY, and three sisters, Wilma (Wimp) Lozier of Riverton, WY, Wanda Murphy and Donna (Doon) Hallock (who both preceded him in death).

He grew up on a farm in Pavillion, WY and graduated in 1952. He served two years in the army and was married to his life-long sweetheart, Leona Riggs, in 1956. Their house never lacked for love,and he still looked at her as though they were newlyweds. They had an abundance of friends and many a childhood pal of their kids knew where to get a meal or have a place to stay. Most days, their unlocked door was a revolving whirlwind of kids playing baseball and riding bikes down the picturesque street they chose to raise their family in Casper, WY.

He was known to all his grandkids as “Papa” and he relished the role he played, delighting in watching the kids play and always had a teasing joke in his sparkling eyes. His most avid hobby was woodworking, and in his little garage shop, he created everything from intricate wooden bulldozers and excavators for all the children to cribs and rocking chairs and picture collage frames. He was truly blessed with talent, though he was always humble and unassuming. He also loved to hunt, fish and camp. He relished a good cup of coffee and conversation with friends.

Calvin worked hard as a carpenter at Sinclair Refinery until he retired in 1995. Calvin and Leona moved to Newell, SD in 2010. He was a kind and generous man, who chose to always look on the sunny side of life. He tried to make everyone he came across laugh, and he’ll never know the joy he brought to many. He will be missed greatly by all who knew and loved him.

In lieu of flowers, please donate to Monument Health in Sturgis, SD, your favorite charity or do a kind deed in honor of the man with the quiet smile. Memorial may be sent in care of Davis Funeral Home at 2203 West Main Street, Riverton, WY 82501. A graveside service will be held 11:00 am on Monday, April 27, 2020, at Mountain View Cemetery in Riverton, WY.