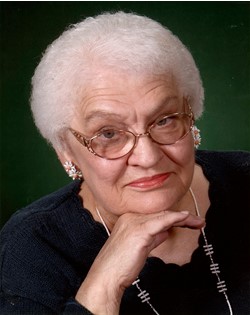 Nola Nile Iiams, 92, of Lander, passed away peacefully on the sunshiny morning of April 21, 2020; at The Springs at Grand Park in Billings, Montana. Due to the Corona Virus Pandemic, family graveside services will be conducted on Monday, April 27, 2020, at 2:00 p.m., Mount Hope Cemetery in Lander, Wyoming.

Nola was born at home to Waunita (Wood) and Byron E. Elkins on December 29, 1927; Worth County, Green Township in Oxford, Missouri. While growing up she was surrounded by four grandparents and three great grandparents within a five mile radius. Her father was first to plant soy beans in the area and had a successful year. By the next year, 1944, everyone was planting soy beans and less profitable. So her father loaded up the family in a 36’ Chevy and headed west to Torrington, Wyoming. In 1946 Nola was stricken with Polio, dominating her right side. She went on to graduate from Torrington High School in 1947. She obtained valuable work experience working for Citizen Bank, Goshen County News, and Jordan Construction Company. Nola headed to Denver, Colorado with Florabelle Bohonnan (Carroll) to attended Denver Beauty School. She received her certification /license and went to work for Blanche Underwood in Torrington as a beautician. She relinquished her license in 2014. Our mom has always been a good person or so we thought until she revealed something shortly before her passing. In 1946 when she had Polio, their house was quarantined, but her older sister, Shirley, persuaded her to leave (sneak) out of the house, which she felt obliged to do. We have no idea why this occurred she didn’t say or want to say what she accomplished from this deed.

Nola’s mom, Waunita, was waitressing in a Torrington café when she introduced Nola to John E. (Jack) Iiams. Jack captured Wuanitas attention by switching sugar and salt shaker contents and untying her apron strings. They were married January 1, 1951, in Douglas, Wyoming at the Episcopal Church which was halfway between families in Torrington and Lander. John and Carol Lambert were Best Man and Maid of Honor.

Their first home was in Cody, 1951, 1952 their oldest daughter, Kathy, was born in Powell. Jacks job with the Soil Conservation Service took them to Riverton in 1953 where they purchased their first home. In 1954 they moved to the Charles Birdell and Sally Iiams ranch in Lander. It was here they had their second daughter, Cindy. They enjoyed living in Wheatland and Worland until returning back to Lander in 1978.

Nola loved collecting anything with a history. She knew the history of Lander and thrived on learning more. She accomplished Iiams linage back to 1300’s and Elkins/Wood family to 1600’s. Many vacations were spent looking through cemeteries to find that one grave stone which gave her a desire to know more.

Nola was involved in life as Girl Scout Leader and 4-H Leader (Dough Dobbers). Was on the Fremont County Election Board at the Iiams School house on Hwy 287, member of First United Methodist Church serving and cooking for many dinners and enjoying working with everyone at the Thrift Shop for 37 years on Mondays and Thursdays. She chaperoned youth groups, Worland Tyrolean, was member of Professional Women’s Club in Torrington and Progressive Women in Riverton.

She was a seamstress extraordinaire, if a new fashion was in the store, she checked it out , go home and put it together for herself and daughters, always made Easter and Christmas outfits including the coats. Her favorite project was sewing doll clothes for Barbie, Mary Poppins including coats, shoes, and stockings. She also sewed outfits for Tyrolean group and made curtains for all the cabins at 4-H camp. She loved card games, Bingo and Dominos.

She loved without reservation, her husband, children and grandchildren. She cherished friendships made over the years throughout Wyoming and her memory never failed her. She gave it her all for her family. The Lord gave us the best he had for a Mom and Grandma, we will miss her deeply but will treasure the time she was here with us.

Memorials may be made to Masonic Lodge #2 or 1st United Methodist Church in Lander in care of Davis Funeral Home, 2203 West Main, Riverton, WY 82501.