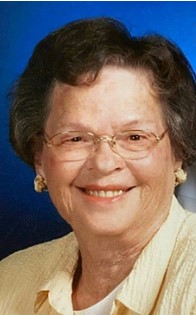 Guestbook 15
Betty Jean Comes Jarvis passed away peacefully on Sunday, April 26, 2020, at the age of 92 years, a month shy of her 93rd birthday. Burial has taken place and a due to the COVID-19, a Celebration of Life will be held at a later date.

Betty was born in Greybull, Wyoming on May 23, 1927 to Nicholas Marcus and Frances Rosina (Moon) Comes. She was raised in Bonneville, WY and graduated from Shoshoni Public School in 1945. She attended the University of Wyoming the following year but ultimately completed her education at Central Business College, Denver, CO in 1947.

She married Myron C. Jarvis on October 23, 1949. Together, they shared 62 years of marriage. They enjoyed their first home, built by Myron himself, on his folk’s original farm in Missouri Valley, where Myron farmed.

A devoted wife, mother, and community member, she was actively involved in many local organizations. She was a member of the Shoshoni School PTA and served one year as president; a member of 38 years and twice president of the Missouri Valley Women’s Club; a member of Fremont County Cowbelles; and 12-year-member and former president of the Riverton Hospital Auxiliary. Since she was 19 years old, Betty was also a member of and former Matron of the Shoshoni Chapter of the Order of Eastern Stars, where she also played the piano for more than 20 years. In 1989, she was presented with the Woman of the Year in Agriculture Award from the Riverton Chamber of Commerce.

Since the age of 16, Betty dedicated hundreds of hours of talent to playing the piano for weddings, church services, and funerals. She also played the piano and organ for the Shoshoni Presbyterian Church for several years. More recently, she played the piano daily for the residents of Homestead Living Center.

Aside from her family, her passions in life included cooking (she was known for her delicious cinnamon rolls), sewing (including making Christmas stockings for newborn babies at Riverton Hospital Auxiliary), and knitting and crocheting thousands of articles of clothing and blankets for family and friends.

Memorial donations in memory of Betty can be made to Shriners Hospital for Children in care of Davis Funeral Home, 2203 W. Main Street, Riverton, WY 82501.