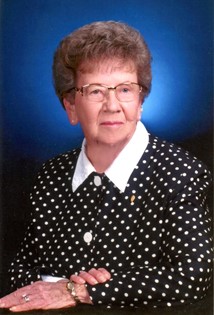 
Viola “Vi” Gilpatrick, 93, of Riverton passed away on Thursday, May 14, 2020, at her home at Mountain Plaza Assisted Living in Casper, WY. A memorial service will be held at 10:00 a.m. Saturday, August 1st, 2020 at the United Methodist Church Courtyard in Riverton. Her final resting place is next to her husband at Mountain View Cemetery in Riverton, WY.

Viola Weber was born on October 6, 1926 in Northern Colorado to George and Anna (Fabricius) Weber. When Vi was three years old, the family moved to Riverton, WY where she resided for the balance of her life. After graduating from Riverton High School, she attended Carl’s Beauty School in Casper for one year and then she worked for Ethel Kalasinsky in Riverton.

On January 1, 1948 she married the love of her life Dick Gilpatrick at the United Methodist Church in Riverton. They made their home in Riverton raising their two children, Phyllis and Rick. She was a homemaker and was there for her husband and children in every endeavor they pursued.

Vi was a member of the United Methodist Church of Riverton and found great joy in her church family. She started singing in the church choir in 1961 and was active until the last few years, she also was a member of the United Methodist Women’s Guild. She was the chairman for 10 years, but a main stay for many more, in the yearly making of noodles and popcorn balls for the annual Christmas Bazaar. Her faith and her Church were very important.

She was a 50 plus year member of P.E.O. and Eastern Star where she held offices through the years. Music, dancing, cooking, ceramics, and gardening were her happy place. You could find her whistling or humming a tune everywhere she went.

She was preceded in death by her parents, husband, Dick Gilpatrick; and two brothers, Harry Weber and Elmer Fabricius.

Memorials may be made to the United Methodist Church or Help for Health Hospice in care of Davis Funeral Home, 2203 West Main Street, Riverton, WY 82501.