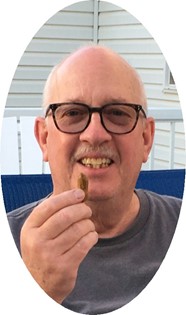 Guestbook 32
Ralph Estes Burns Jr. left his earthly life enjoying one of his favorite pastimes; playing disc golf at Sunset Park in Riverton, Wyoming. Ralph and his wife Lita had been visiting her mother and family for the Memorial Day holiday.

After college Ralph moved to Colorado Springs, Colorado, with his aunt and uncle and their family. He found he enjoyed the Rocky Mountains and remained in Colorado, later moving to Westminster. He met Lita in Westminster and they married in 1989. After their son, Matthew, was born in 1990, the Burns family moved to Riverton. Marie was born in 1994, completing their family.

Ralph and his family relocated to Coeur d’Alene, Idaho in 2001, where the family still resides. Ralph has been a Sheriff’s Deputy for the past 26 years; seven years for Fremont County Sheriff’s Department and the past 19 years for the Kootenai County Sheriff’s Department. Ralph’s greatest joy in life was spending time with his family. Friday night game night became a family tradition. His border collies trained him well to play Frisbee and go for walks. He also enjoyed playing disc golf with anyone who was willing to play with him, but especially with his son, brother-in-law, nephew, and work buddies. Golf was also a favorite pastime. When his kids played soccer, he was their greatest fan and did his part refereeing as many games as he could fit in a weekend.

Ralph was baptized into the Southern Baptist faith as a child and converted to Catholicism after he married Lita. He was a very spiritual man and spent hours each day praying and reading to help deepen his faith. He was a devout member of Pope St. Pius X Catholic Church, where he served as a Hospitality Minister and was a member of the Knights of Columbus.

The family requests that in lieu of flowers, gift donation be sent to Pope St. Pius X Food Pantry, a ministry that serves the poor and homeless of the Coeur d’Alene community, or to a non-profit of the donor’s choice. Memorial may be sent to Davis Funeral Home, 2203 West Main Street, Riverton, WY 82501.