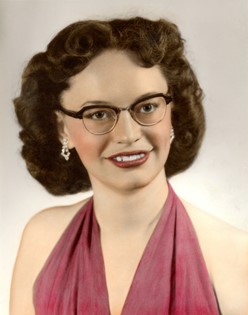 Guestbook 9
Betty Stagner, 88, of Riverton passed away on Monday, June 15, 2020, at the Wind River Rehabilitation and Care Center. A graveside memorial service will be held at 11:00 am on Saturday, June 20, 2020, at Mountain View Cemetery.

Betty Louise Cliame was born on May 7, 1932 in Manderson, WY to Charles and Martha (Storm) Cliame. She grew up in Manderson with her three brothers and one sister. She graduated from Worland High School as the Valedictorian.

She was living in Riverton after school and where she met her first husband, Harold Robert “Bob” Willenbrecht. They were married on September 5, 1954. Together they had two sons, Harold Dean and Robert Scott. They were married for 44 years when Bob passed away in 1998. In 2002, Betty married Clyde Stagner and they shared 16 years together before he passed in 2018.

Betty started her working career at JC Penny’s in Riverton and the moved to Bridgeport, NE after getting married, she was in charge of the Social Service there for approximately three years. Bob worked for Superior Oil Company and the next move was to Gillette, WY. They then moved back to Riverton in 1969 or 1968 where they made their forever home. Her work career included working for a credit union, Central Wyoming College, Riverton Memorial Hospital (twice, 2nd time as the Business Administrative Secretary, and eventually she became a Realtor for ERA for ten to twelve years before retiring. She was the top seller for ERA for two years.

She was a member of the Kiwanis and Golden Kiwanis, was the Past President, and also supported the Women’s Shelter.

Betty was always busy with her family, friends, and her community. She was involved in many different activities and had a variety of interest. One fact that many did not realize was that when she was twenty years old she received her Private Pilot License.

She is survived by her son, Dean Willenbrect; grandchildren, Crystal, Stephanie, and two sons, Derek; and her great grandchildren, Elijah, Tyaira, Lilly, and Emma.

She was preceded in death by her two husbands, Bob Willenbrecht and Clyde Stagner; son, Scott Willenbrecht; grandson, Jake Willenbrect; parents, three brothers, and one sister.