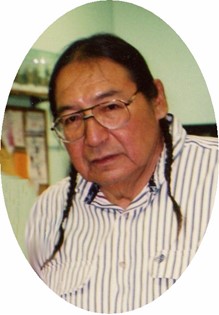 George was baptized into the Catholic faith and attended church every Sunday until his health prevented him.

On September 24, 1968 he married Avis Blanche Chamberlain in Lander, WY. They were married for over 39 years before Avis passed in 2006. He lived in Colorado for 20 years before moving home to the Wind River Reservation, his forever home.

George worked in the oilfield, worked on the new highway as a security guard in Glenwood Canyon in Colorado, and was a maintenance man at WalMart until retirement.

George was a Denver Bronco Fan through and through as well as an avid Oklahoma Sooner fan. He also liked watching wrestling and bull riding on T.V., and telling jokes. He made his claim to fame by having a small part in the Bill Murray movie, “Larger than Life”. Having his grandchildren around him was the best and he loved them all.