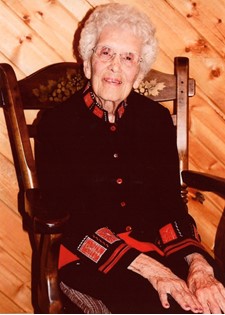 Lorraine Louise Mutzenberger was born on March 1, 1924 in Hazen,North Dakota to Andrew Mutzenberger and Elizabeth Baisch Mutzenberger.She died July 12, 2020 at Morning Star Care Center, Fort Washakie, Wyoming. She often told her three daughters, D'Arlyn, LaDonna and Sherree she had a very happy childhood living on the family farm homestead near Glendive, Montana. She was a tomboy, helping her father with the farm work.

She was boarded in town during high school and graduated from Dawson County High School in 1942 and married Don Lamphier shortly thereafter. They lived in different places in Montana and Wyoming for the next 25 years and in 1964 they moved to the Chicago area. They divorced in 1967 and she remarried in 1978 to Roy Guthrie. After they retired they moved to Kentucky. She was widowed in 2000 and remained in Kentucky until she moved to Wyoming in 2013. She lived with each of her 3 daughters in Wyoming, Washington and Minnesota before she went to Morning Star Care Center in 2018.

She had many years of various executive secretarial work in Montana , Wyoming and Chicago. She was honored for 18 years of service with Eaton Corp, in Chicago with an elaborate retirement celebration where she was a secretary, receptionist and switchboard operator.

She was a member of Eastern Star, Arapahoe Homemakers Club and the Lutheran Church. She was a faithful Christian, inspiring her children and grandchildren and she sang in the choir. She enjoyed playing the piano and singing hymns, dancing, flower gardening, cooking, bowling and traveling.

She was preceded in death by her entire family, parents Andrew and Elizabeth: sisters Elsie, Hertha, Selma and Martha: and brothers, Arthur and Edwin.

Her ashes will be buried in Hopkinsville, Kentucky next to her late husband, Roy Guthrie.

A memorial service will be held in the Spring of 2021 in Riverton, Wyoming at a place, time and date to be announced later in the Riverton,Wyoming Ranger newspaper on thedavisfuneralhome.com website.

Memorials may be sent to Morning Star Care Center, PO Box 859, Fort Washakie, WY 82514. Please make to the attention of “Misty”. The family has designated the memorials be used for the Elders in Need Fund and a memorial bench with Lorraine’s name on it.