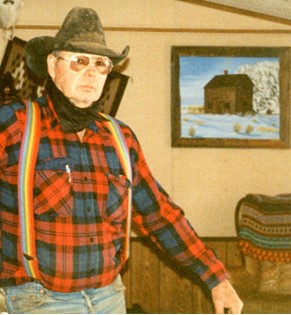 Guestbook 0
Celebration of Life will be held at a later date for Howard William Davidson, 88, who passed away on July 18, 2020 at his home in Riverton, WY. Cremation has taken place.

Howard was born on the family homestead ranch, the son of William and Gladys Davidson. He was the fourth generation to own and operate the original Strathkay Ranch, a homestead proved up by Scottish ancestors in the late 1800’s. He grew up on the ranch north of Parker, Colorado, and told stories to his children about haying and farming the old fashioned way, using horse drawn implements. He milked cows by hand for the commercial family dairy farm, and was part of progressing to mechanized milking machines. After morning milking, he and his sister Margie rode horses 6 miles to attend Cherry Creek one room school through elementary school, completing his education at Parker High School.

He married his first wife, Charlotte, and they had 4 children. They later divorced. They operated their farm business raising wheat, barley, oats, hay, cattle, horses, & kids, dogs, cats, pet 4H rabbits, and a few chickens until the late 60’s when he moved with his family to own and operate the Pinegrove Ranch south of Rawlins, Wyoming. There the family all worked to operate the large cattle & sheep ranching business, which covered territory ranging from where a jackrabbit had to tote his lunch to beautiful high country at the foothills of the Sierra Madre range. He trained and rode wild horses that were a working part of that ranch until the Pinegrove was sold. He started up “Davidson Riding Academy” which was a name fondly given by Howard’s kids (including, later, step kids and grandchildren) to commemorate the hours and efforts he devoted to teach them the necessary extensive horsemanship skills for everyday ranch work. His oldest son, Harlan, was known for riding & training the broncs and green horses no one else dared to ride, and became an exceptional horseman, under his father’s tutelage. Daughters, Lynn and Lora learned the fine art of sheepherding while spending summers in a sheep wagon, riding herd on the woolies. Youngest son Barry acquired his father’s love of hunting and keen shooting aim while growing up on the Pinegrove, proudly bringing home sage grouse and other wild game for family suppers.

In the early seventies, Howard started up D & E Construction, an oilfield and excavation company, which he ran during the oilfield boom in south-southwest Wyoming, eventually basing operations near Evanston, Wyoming. They built many roads and oilfield locations for oil and gas companies. Howard’s son, Barry, was an integral part of the construction business, worked exceptionally hard for his father, and later took over the business, renaming it BFD Construction. Future wife, Sally, was also an integral part of the business, and later married Howard in 1986, which added two children to the clan. Howard’s heart was always with ranching and livestock, so he and Sally purchased a ranch along the scenic Escalante River leading East to Lake Powell, which they renamed Strathkay Ranch, near Escalante, Utah. They ran a very successful ranch in the beautiful desert of southwest Utah, where some asked if their cows ate “rocks and sticks” as the grazing appeared to a non educated eye to be mighty sparse. Sally coined the operations’ signature slogan, “Get high on beef, our cows eat grass.” The Escalante ranch became the scene for the many grandchildren to participate in active ranch life including cattle drives, branding and general ranching adventures. In addition, this beautiful Utah high desert for Sally and Howard - both being lovers of history - provided rich and abundant ancient Indian artifacts and history, and scenery that attracted the filming of many western films.

Howard and Sally, seeking better water and range opportunities, moved back to Wyoming in the early 90’s to operate another large family ranch east of Riverton, Wyoming. There they were assisted by their hard working & fun loving grandson, Tad, for many years, where they raised cattle and hay. Many family gatherings were held where the ranching adventures and hijinks continued until Howard took semi-retirement. Mr. Davidson enjoyed every aspect of ranch life, educating himself and developing and refining the many lifelong skills necessary to be the “jack of all trades” required of a successful rancher including machinery repair, welding, range and livestock improvement, roping, branding, doctoring, horse shoeing, crop cultivation, and of course, yarn-spinning. His leisure time was spent researching and reading about local history, fishing, deer and elk hunting, boating and rodeo as well as having a passion for training and breaking horses, along with many family gatherings that included good food, drinks and children.

He was preceded in death by his parents; son, Barry and stepson, William Shaw.

Cremation is under the direction of Davis Funeral Home.