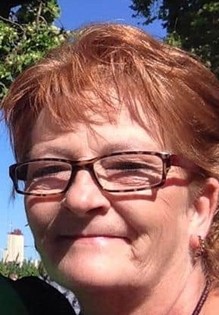 A loving mother, daughter, grandmother, and friend, she delighted in nothing more than being surrounded by family.

Sammy was born on August 28, 1962 to Gail and Janet (Ramsey) Folston. She had one brother, Gary who resides in Pinedale, WY and one sister, Janail Trimmer residing in Hudson, WY. She grew up in Lander, graduating from Lander Valley High School where she excelled in swimming with the girls swim team.

Shawnna was married to Gregory Sorrelle and had two children, Cody and Amber. Amber had three children, Kaylee, Hayden, and Koda. Sammy cherished every moment she could spend with them. She later met and married Frank Collins.

As a Wyoming native, the outdoors provided her and the family much enjoyment. Some of her favorite activities where snowmobiling, boating, fishing, camping, and riding quads. Frequenting the local greenhouse seemingly every day in the summer, she brought her Mom’s yard to life with a large variety of flowers in beds and hanging planters. As an avid animal lover, she seemed to have a sixth sense and took in many through the years that were sick or had special needs. There are photos of Sammy pushing her baby buggy with Betsy, the cat, dressed in doll clothes. Her mother joked that Betsy was the meanest cat on the planet but not with Sammy.

Sammy’s last job at the Senior Citizens Center was her favorite. Her caregiving personality was shared and loved by so many that visited the center, as well as thru the years.

Sammy was preceded in death by her father, Gail Folston; daughter, Amber Sorrelle; and several aunts and uncles.

Memorials may be made to the Lander Senior Citizens Center or Donor’s Choice in care of Davis Funeral Home, 2203 West Main Street, Riverton, WY 82501.

Shawnna will be so deeply missed by those who knew and loved her but as a Nazarene Church member we will find comfort knowing that she had come to a relationship with Jesus and has been placed in his hands.