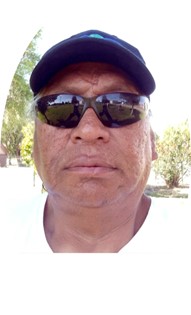 Houston Brian Headley was born on April 24, 1968 in Lander, Wyoming to Louis R. Headley and Cordelia E. (Yellow Plume) Headley. His Indian name is Old Crow , Houu Cih” Ni’ which was given to him by his great grandpa, George Quiver which was his name.

Houston was baptized in the Catholic faith.

When he was younger he enjoyed fancy dancing with his father Louis, which took him to Rome, Italy, Zurich,Switzerland, Washington, D.C. Steamboat Springs and Canada. While in Canada he met his family the Cropped Eared Wolves and Shot on Both Sides.

Houston liked watching t.v. and social media. He was well known for his cooking. He enjoyed camping, hunting, fishing and hiking. He loved taking care of his family, especially his parents. He worked construction, Sho-Rap firefighter, and oil field worker (71, Bruton, and Marathon) He completed training at Ellensburg, Washington as a Water Resources Technician in 1998. He married Catherin Goggles and they had three sons; Jeffery Brian, Jeremy Ryan and Dustin Blaine. They later divorced.

He then married Julia C’Bearing and they had two daughters; Kendra and Lowayne.they later divorced.

He later married Anjelica Yellow Bear and they had two daughters Mary Margaret and Hailey Elaine. Houston had a big heart and loved all his children and grandchildren.