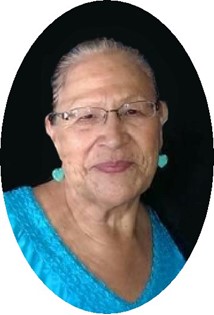 Guestbook 17
Susan CrazyThunder, 76, of Arapahoe passed away on Sunday, August 2, 2020, at Sage West Hospital – Lander. A graveside service will be at 10:00 am on Saturday, August 8, 2020, at the Arapaho Catholic Cemetery with Father Jim Heiser officiating.

She was given her Native American name Yellow Paint Woman, “Niihoonesei’”.

Susan Whiteplume was born on July 22, 1944 in Fort Washakie, WY to Jacob and Angela (Brown) Whiteplume. She grew up on the Wind River Reservation and attended school at Haskell Institute in Lawrence, KS. She earned her Associates Degree from Central Wyoming College, graduated from the University of Illinois with a Bachelor of Science Degree and earned a Bachelor of Arts Degree from the University of Wyoming. She lived in Chicago, IL for fourteen years before returning to her home, the Wind River Reservation in 1980.

On July 1966 she married William Joseph CrazyThunder and together they raised a large family.

Susan was baptized into the Catholic Church. She was involved in ministry work in the community and was a Prayer Warrior and prayed for many people. She love praising the Lord and spreading the Word.

Susan loved visiting and being surrounded by family and friends, enjoyed her grandchildren, and love going to Senior Tuesday at the casino.

We have numerous family and friends, please forgive us if we left anyone out. She loved everyone.