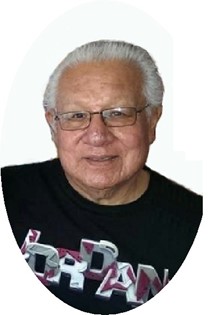 Guestbook 5
William “Billy” CrazyThunder, 73, of Arapahoe, WY passed away on Tuesday, August 4, 2020, at Wyoming Medical Center in Casper, WY. A double graveside service, for both Billy and his wife, Susan, will be at 10:00 am on Saturday, August 8, 2020, at the Arapaho Catholic Cemetery with Father Jim Heiser officiating.

William Joseph CrazyThunder was born on December, 24, 1946 in Pine Ridge, South Dakota to Joseph and Agnes (Kills Enemy) CrazyThunder. He attended Holy Rosary Mission School in Pine Ridge, SD before going to Haskell Institute in Lawrence, KS. He received his Associates Degree and Welding Certificate from Haskell. He went on to further his education and work studies at Truman College, Northeastern Illinois University and finally receiving his Bachelor of Arts Degree from the University of Wyoming.

While Billy was at Haskell Institute he met his wife, Susan Whiteplume, they were married on May 28, 1966 at Stephen’s Catholic Church. They were married for 54 years before they both passed. They raised three sons and one daughter while going to school and working full time.

In the early years while living in Chicago, IL, he worked as a welder for General Motors on the John Hancock Building, in the 70’s he was a welder for the Chicago Boiler, CO. After moving back to Wyoming he worked on the St. Stephens’ Indian School as a welder while it was being built. He later worked as a Math Teacher Assistant at St. Stephen’s and finally retired as a Counselor with White Buffalo Recovery.

Billy was an avid coin collector, enjoyed going to the Senior Meals, liked to read, and he was known for his green thumb and growing trees.