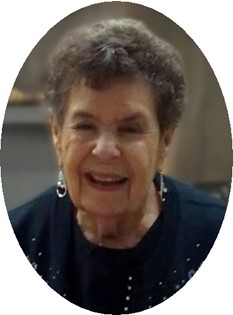 Guestbook 6
Lola M. McRann, 86, of Cody passed away at Westward Heights Care Center on Thursday, August 06, 2020. Due to the times and Covid restrictions the family is planning a private service at a later time.

Lola Mae Neisess was born on September 6, 1933 in Nashua, MN to Walter William and Muriel V. (Rumsey) Neisess. She grew up in Newell, SD and graduated from Newell High School. She attended Black Hill College and Northwest College earning her Associates Degree.

On November 7, 1951 she married the love of her life, William “Bill” James McRann Sr., in Newell, SD. They were married for over 65 years before Bill passed in 2017. Together they raised three children, William Jr., Michael, and Sheree. Bill and Lola lived in many places including Hulett, WY, Powell, WY, Cheyenne, WY, Colleen, TX, Mesa, AZ, and Germany.

Lola worked as an educator very early in her lifetime, created monograms at the Powell Bernina sewing center, worked as an Activity Director at Powell Nursing Home, was a co-owner of Powell Liquor and wrote grants for the Alaska schools.

She was a member of the Elk Club Does and many bridge clubs.

She was preceded in death by her parents, Walter and Muriel Neisess; sister, Darlene Coleman: and husband, William James McRann, Sr.