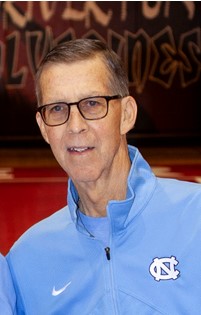 
Riverton native and life-long Wolverine, Ronald Christopher Porter (Ron), passed away peacefully in his home on Tuesday, August 25, surrounded by his family after a courageous battle with cancer. He was 67.

A Celebration of Coach Porter’s Life will be held at 10 a.m. on Saturday, September 5, at Wolverine Field in Riverton, Wyoming. In lieu of flowers or other gifts, donations may be made to the RHS Booster Club or The Ron Porter “Strong” Memorial Scholarship at Central Wyoming College in care of the Davis Funeral Home, 2203 W. Main Street, Riverton, WY 82501.

Ron was born on January 12, 1953, in Riverton to Robert (Bob) and Jean Porter. He spent most of his childhood either on a baseball diamond or in a gym. He attended school in Riverton, graduating from RHS in 1971. After high school, Ron continued his studies at Casper College and the University of Northern Colorado (UNC), playing basketball at both institutions while earning degrees in English and Physical Education.

It was at UNC where Ron met the love of his life, Toi (Elliston), while dancing across the floor of a college party. Like on the basketball court, his moves were hard to defend against. The two married in Greeley, Colorado, at the Episcopal Church in 1977.

Ron returned to the Cowboy State and began his teaching and coaching career at Rawlins High School. He and Toi then relocated to Cody, where he spent the next six years teaching English and coaching varsity volleyball, basketball and track. All three of Ron and Toi’s children were born in “Wody, Cyoming,” as Ron referred to it.

But Riverton was always home. In 1984, Ron and the family returned to teach and coach at RHS. He also followed in his father’s footsteps as “The Voice of the Wolverines,” announcing games under the Friday night lights of Tonkin Stadium and Wolverine Field. Over the next 35 years, Ron coached numerous teams for both Wolverine boys and girls basketball. He graciously shared his time and passion for the game with his players, teaching them the fundamentals of both basketball and life.

At the core of everything Ron did was a deep-rooted faith that provided him with strength, courage and a gift for touching many lives. His philosophy of “Together We R” speaks to the power of team, of sacrifice, and of never passing up an opportunity to contribute. He taught his three children and countless others to always do what is right, that it’s okay to fail, to never stop learning, and to never, ever give up. Ron was instrumental in the growth of American Legion Baseball across Wyoming, and he found himself back on those same baseball diamonds he loved as a child. Over 40 years, he umpired innumerable games locally, as well as in district and state tournaments and several Northwest Regional Tournaments. Serving as Umpire in Chief for 30 years, Ron was responsible for starting the first state-wide umpiring association. He always said, “If it sounds like a strike, then it’s a strike.”

An affinity for Motown may have equaled Ron’s love for sports. Countless people witnessed his stellar dance moves, whether on a bus, in the RHS hallways, in his living room, or anywhere a great tune played.

But more than his love for athletics, Motown and literature, was Ron’s love for his family and friends. He was a devoted and loyal husband for 43 years, looking to Toi as his co-head coach. He was an incredible and unselfish father, grandfather and son — always prioritizing his faith and family first. His “Mudville Nine” — the grandchildren he affectionately referred to as his minor league baseball team — were the lights of his life. Ron was happiest on a sideline (occasionally harassing officials) while cheering on his Nine. Always a coach, he continued to remind his Nine that it was team first, always... and that defense wins games.

Ron was preceded in death by his parents, Bob and Jean Porter; and his sisters, Robyn Cristler and Becky Porter.

He is survived by Toi, his wife and eternal dance partner; his three children, Ashley McCarten (Jay), Drew Porter, and Brittany Yeates (Talon); his grandchildren, The Mudville Nine; and his siblings, Roxanne McLaughlin (Mac) and Rick Porter (Sandy).