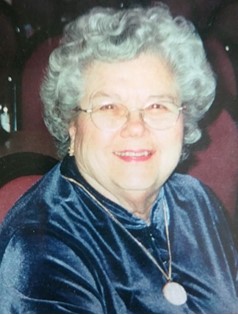 Guestbook 2
Merna R. Lockhart passed away on August 22, 2020, surrounded by family and friends, in her home of the last eight years, Newport Beach/Costa Mesa, California. She was two months shy of her 98th birthday.

Graveside services will be Thursday, September 3, 2020, 2:00 p.m. at the Mountain View Cemetery in Riverton, Wyoming where she will be laid to rest with her family.

Merna was born in Bayard, Nebraska on October 22, 1922 to parents Leroy and Viola Edith Lambert, the fifth child in a family of eight. She graduated from Bayard High School and received her license and certification from Nebraska’s School of Cosmetology. She met and married Donald E. Lockhart in 1940, and during their first year of marriage, they danced every week to the music of the Big Bands that performed on Saturday nights in the community centers and dance halls all over the Midwest.

When war was declared after Pearl Harbor was bombed, Merna became part of what’s been labeled as the Greatest Generation, a salute to the stalwart people who survived both The Great Depression and World War II. For four years she was a Navy SeaBee’s wife, working, rationing, and sending care packages from home.

Merna and Don moved to Shoshoni in Fremont County, Wyoming in 1950 when a post-war homestead action opened land via lottery to veterans. They became part of the rugged, hard-working men and woman, new pioneers, who built homes where there was nothing but a vast far-reaching prairie, pulling thousands of sagebrush bushes in order to create lush irrigated farmland.

As such an early pioneer, she watched the famous Wind River being dammed and turned into beautiful Boysen Lake. She and Don worked tirelessly in all kinds of adversity and carved a tree-studded home in a barren frontier land.

Saturday nights, Merna and Don joined friends in Wyoming towns, Shoshoni, Riverton or Hudson, for dinner and dancing to the local bands. Such evenings were never casual. It was a time of dressy fashions and glamour after a long week’s work.

For 25 years, Merna was part of Fremont County’s active community, winning ribbons at the county fairs and joining other community leaders in advancing betterment projects. She was an expert tailor and seamstress, and her needlework was prized as art. Her fresh produce canning was unsurpassed. The Lockharts were known for their productive gardens. She was both a traditional and gourmet cook, giving frequent dinner parties and helping at benefit socials.

She was a popular census taker for ranches and farms, often driving all day to find the outliers. And, she was one of the early participants in environmental mitigation, measuring silt during storm flooding in order to monitor releases into Boysen Lake, often in dangerous conditions. A dedicated and loyal friend and neighbor, Merna always showed up with a covered dish at weddings, funerals, or illnesses. In 1970, she was a constant support when Don was elected to the Wyoming State Legislature, attending endless business meetings with Cheyenne’s dedicated ladies’ committees.

Then, in 1974 they semi-retired to Dayton, Ohio, forming Clearwater Construction Company to construct or repair community swimming pools in the Tri-State Area. During that time, she was part of Twigs #10, her unit of the ladies’ organization famously dedicated, with year-around work on crafts and much anticipated annual events, to raising money for the Dayton Children’s Hospital.

She lived in her Ohio home on Royalwood Drive for 40 years, and formed lifelong friendships. Until the day she died, she was still exchanging letters to friends “back home” in every home she’d made.

For 70 years, Merna was the family business administrator. She negotiated contracts, managed bank accounts, made deals in procurements, established reasonable prices, settled salary disputes, and studied tax laws for any changes. Whether she was buying winter cattle, or contracting for swimming pool openings, she could be a canny and amazing dealmaker.

Merna and Don retired fully in 1984, spending part of the year in Myrtle Beach, South Carolina. Despite their years in the East, they maintained property and stayed in touch with family and friends still in Wyoming, returning to visit every summer. Merna was preceded in death by her husband in 2004.

She is survived by her four children, Dale McCann (Edward), Charles Lockhart, Maggi Zobel, and Lee Lockhart (Susan) and her sisters, Betty Manchester and Pat Ulmer. She is also survived by 11 grandchildren: Donald, Jason, Paul, and Tim Lockhart; Lisa, Jennifer, Robert, and Cait Elston; Judy Martinson and Scott and Anna Lockhart. She has12 great-grandchildren.