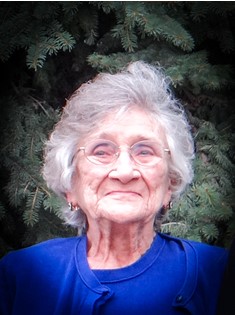 Dereva Dean Manring was born on March 21, 1928 in McCall, MO to William Harold and Ida Luella (Jones) Manring. She was one of seven children, raised in Missouri.

Dereva recently was reconfirmed in the Christian Faith with Pastor Echo Klaproth.

She met George W. Johnson in the mid 1940’s and on February 7, 1947 they were married in Washington State. They returned to the family ranch on Burma Road before moving to Dubois where they settled and raised their two children, George Jr “Gerb” and Donna. In 1973 they moved back to Riverton where they stayed until both passed.

Dereva worked as a secretary for years before moving to Riverton where she obtained her Cosmetology License from the Beauty School. She opened her own Cosmetology school in 1978 and ran it until 1983. She was a Cosmetologist for 35 years finally retiring at the age of 80.

She was a life time member of the Order of the Eastern Star.

Dereva enjoyed crocheting, reading romances, and enjoyed her work. She was very dedicated to her children and grandchildren and always willing to listen and help in any way.

She was preceded in death by her parents, William and Ida Manring; husband, George W. Johnson, and her five siblings, Dayton, Kathleen, Doris, Kenneth, and Dudley.