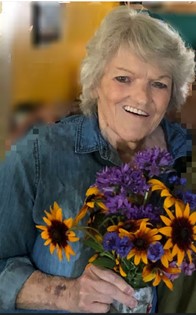 Beloved Riverton resident and business owner Colleen Weakland lived a full life, made friends wherever she traveled, helped others, and loved her family and the Lord. She passed away at the University of Utah Hunstman Cancer Institute September 2, 2020, a month shy of her 78th birthday.

Colleen was the fourth of nine children born to John and Theresa Fulton in Rockford, Illinois on Oct. 11, 1942. She spent a good part of her youth living throughout the western U.S. as her father’s work in the oil field industry took them from location to location. The family eventually settled in Mills, Wyo., there she attended St. Anthony’s School and graduated from Natrona County High School.

Upon graduation, she attended beauty school and opened a thriving shop in Casper.

After marriage, she lived on cattle ranches in Chugwater, Wyo., and then Newcastle, Wyo., raising four children, before moving to Fremont County, a place she loved and called home for nearly half a century until her passing.

In the 1980s and 90s, she ran a popular beauty salon at various locations in Riverton, including the Park Place, located across the street from City Park. She was always on the ready with her trusty scissors to take care of family and friends at any hour. If you couldn’t afford it, it didn’t matter. Knowing someone looked and felt better was payment enough. She took great care of countless clients even after their passing, often going to Davis Funeral Home after hours to make “her ladies” look pretty one last time. She never accepted payment for those services. She officially retired three years ago after serving as the beautician at Riverton’s Sertoma Senior Center, where she cared for the resident’s needs.

In her younger years she was a talented bowler, competing in leagues and tournaments around the state. She once rolled a 299, one pin shy of a perfect 300. She continued to bowl into her 70s. She enjoyed watching sports in person and on TV, including college basketball (her favorite), plus college football and the NFL. She loved the Wyoming Cowboys.

Despite serious medical challenges this past decade, she inspired others with her resilience and toughness. A two-time cancer survivor, she continued to spend time with loved ones, travel, and enjoyed fishing in her beloved Wind River Mountains. She lived life to its fullest, never complaining about pain or feeling sorry for her situation.

She had a life-long love affair with Wyoming’s beauty and history, which she passed on to her children and shared with complete strangers. Colleen had a great affinity for the people and culture of the Wind River Indian Reservation, participating in many social activities and often attending masses or events at St. Stephen’s Mission.

She will be remembered for her creativity, crocheting colorful afghans for family, friends and charitable causes. Colleen quickly made friends wherever she went, rarely talking about herself, but always sharing the latest activities and adventures of her children and grandchildren.

Among those she considered family was Kinisha Pullen, who was like a daughter. Her two beautiful children, Cairo and Zane, affectionately called her “Grandma Colleen”.

Colleen was proud of her Irish heritage and Catholic faith as a member at St. Margaret’s Parish, where she volunteered at the school.

The family would like to thank all of the talented doctors, nurses and healthcare professionals who helped Colleen in recent years, including the staffs at the University of Utah Hunstman Cancer Institute, the Cardiac Care Unit at the Wyoming Medical Center in Casper, and the Wind River Dialysis Center in Fort Washakie, Wyo.

A Rosary will held Friday, September 11, at 7:30 p.m., and a memorial service September 12 at 10 a.m., both at the St. Margaret’s School Gymnasium. Her final resting place will be the Mountain View Cemetery.

Memorial donations can made in Colleen’s name to the University of Utah’s Huntsman Cancer Institute at huntsmancancer.org.