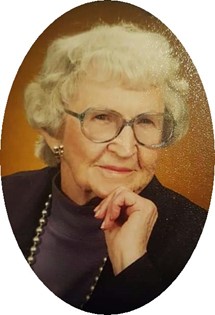 Guestbook 9
Madge Webber, 104, of Riverton passed away on Thursday, September 3, 2020, at Westward Heights Care Center in Lander. WY. A graveside service will be held at 10:00 am on Wednesday, September 9, 2020 at Mountain View Cemetery in Riverton.

Madge Wilson was born on June 29, 1916 in Sylva, North Carolina to John Hayes and Madge (Bridges) Wilson. She was one of nine children. She grew up in Sylva and graduated from high school. It was in Sylva that she was crowned “Miss Jackson County” when she was 17.

She married Fredric LaMont Webber on June 20, 1942 . They lived in Tennessee before moving to Riverton where Mr. Webber worked on the Midvale Irrigation Project. It was Riverton where she made her forever home raising her family and becoming involved in the community.

Madge was a homemaker but was involved in many activities with her husband and children. She was known as a “Social Butterfly” and never met a stranger. She was a sweet Southern Woman that could spit fire. She taught Bridge for several years, loved to babysit her grandkids, and also loved to visit her daughter in Indiana as well as her brothers and sisters in North Carolina. Having picnics at Louis Lake above Lander was something she looked forward to and loved.

She was preceded in death by her husband, Fred Webber; daughter, Gail; all of her siblings; and parents, John and Madge Wilson.