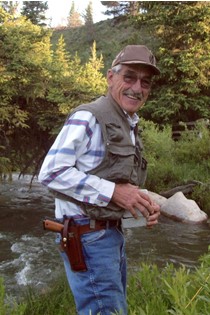 Guestbook 6
Robert “Bob” J. Brown, 77, of Riverton passed away Friday, September 4, 2020 at home with his wife by his side. Per his request cremation has taken place and no memorial services will be held.

Robert John Brown was born July 27, 1943 in Hollywood, California to John Edwin Brown and Vera (Yerage) Brown. He was raised and baptized catholic. Bob was raised in the Ogden, Utah valley where he graduated school and lived for many years.

Bob lived the majority of his life in Wyoming communities of Casper and Kemmerer and moved to Riverton five years ago. He had three long standing careers in his life and retired from Loaf and Jug in June of 2018 after many years as a DEQ inspector.

On October 10, 2015 Bob married Brenda Dee McCart of Riverton at the Moulton Barn near Jackson, Wyoming. The couple appreciated the love and kindness of each other.

Bob was passionate about his family and enjoyed the outdoors. He loved to fish and camp. He will be remembered for his dedication to his work, his kind heart, the appreciation of the simple things in life and the love he shared by his many friends.

He was preceded in death by his parents; twin sister, Robbie; sister, Mary; and brother, Jim Brown.

The World has lost a special person while heaven has gained an angel.