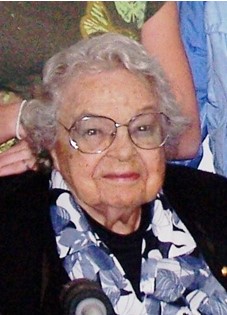 Guestbook 1
Lois C. Pease died at her son's rural Lander home on Wednesday morning, Oct. 22, 2008, at the age of 92. Memorial services will be held at 1:00 pm on November 29 at the First United Methodist Church of Lander. Pastor Steve Hermes will officiate. Interment will be in the Lingle Cemetery. Lois Corine Rentz was born in Burns, Wyo., on Sept. 28, 1916, the daughter of Rolla and Leona (Logsdon) Rentz. She was graduated from Burns High School in 1934 and attended the University of Wyoming for one year. She then enrolled at the Chillicothe Business School in Chillicothe, Mo., and was graduated with a degree in business. Mrs. Pease was of the Methodist faith and a member of the First United Methodist Church of Lander where she belonged to the Ruth Circle and worked in the Methodist Thrift Shop. She had worked as a bookkeeper for Harris Furniture in Cheyenne, Plains Furniture in Riverton, for the Goshen County Welfare Department, as office manager of the Selective Service System in Torrington, Casper, and Douglas. Before coming to Lander in 1984, she had lived in Torrington, Riverton, Casper, Cheyenne, and Burns. Mrs. Pease was a member of the American Legion Auxiliary, VFW Auxiliary, Business and Professional Women's Club, active with the Cub Scouts and Boy Scouts, a member of the Pepehuma Club of Fremont County Extension Clubs, and the Wyoming State Historical Society. Her family said Mrs. Pease enjoyed crafts, bridge, travel, sending and receiving cards and letters, and spending time with her family and friends. Survivors include a son, Kenneth V. Persson and his wife Patricia of Lander; daughters-in-law, Gayle Persson of Rock Springs and Marcie Persson of Hillsville, Virginia; seven grandchildren, Ken Persson, Jr., Gail Reed, Michael Persson, Samantha Majewski, Darrell Persson, Ronald Persson, and Teressa Haynes; 16 great grandchildren and two great-great grandchildren; a sister, Florence Kornegay and her husband Sid of Tucson, Ariz.; numerous nieces and nephews. She was preceded in death by her ex husband, Kenneth V. Carpenter; husbands, Darrell Persson and Floyd Pease; her parents, Rolla and Leona Rentz; a brother, Lawrence Rentz; sister, Wyoma Pierce, and sons, Carl E. Persson and Charles M. Persson. Memorials may be made to Wind River Hospice or the Lander Senior Citizens Center, in care of the Davis Funeral Home, 2203 West Main, Riverton, WY 82501. On-line obituaries are available and condolences for the family may be made at: thedavisfuneralhome.com Services are under the direction of the Davis Funeral Home of Riverton.