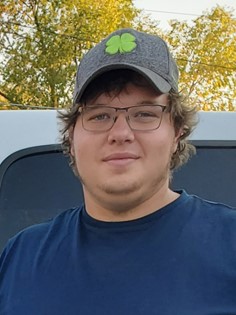 A funeral service is planned for Friday, October 23rd at the Fremont County Fairgrounds - Fremont Center at 2:00 pm. The family asks for you to join them after the service for a celebration of life at the same location. Food will be provided.

Jared was born in Cottonwood, Idaho, on January 5, 2000 to Sarah (Sonnen) Remacle and Seth (Pepper) Harman. Jared spent his first nine years in Idaho, attending Prairie Elementary School until 3rd Grade. His family moved to Riverton, Wyoming in 2009, where he attended school at Rendezvous Elementary and Riverton Middle School. When he entered high school, he attended Wind River High School, graduating in 2019.

Jared grew up playing football, starting in Riverton Junior Football League, playing through 6th grade, and then played for Riverton Middle School through 8th grade. When he transferred to Wind River High School, he threw on #78 and became known as “Big Guy Jared Sonnen” during starting lineup announcements. Standing at 6’9” and weighing in at 360 pounds, Jared went on to play a year of college football at the Dakota College of Bottineau before the program was shut down. He came back home and entered into an Electric Apprenticeship with BHI and was currently working on a job site in Casper.

It has been said from the beginning that Jared had to have a body this big to fit his giant heart. He was a giver, a protector, and a helper. Jared always found ways to help and give to other people, even if he didn’t know them. Anyone who needed help on their ranches, throwing up bales, or with moving furniture, Jared was there. He was known for standing up for “the little guys.” All he knew was love, loyalty, compassion and comradery on the field and off the field. The stories are endless of how he stepped in to help when no one else would. With the few days off he would have in the week, he would do little odds and ends for his family without hesitation. He made time for his favorite pastimes which include hunting, going out on his great grandpa’s fishing boat, working on his truck, and going target shooting.

To have known Jared is to have known God’s love. His smile and goofy nature made him the gentle giant who knew how to be the light others needed. He is survived by his parents Ethan and Sarah Remacle, and Pepper and Kim Harman; siblings Cora, Kristopher, Isaiah and Olivia Remacle and Bucky and Hank Harman; maternal grandparents Greg and Colleen Sonnen and paternal grandparents Gordon and Marilyn Harman; grandparents John and Chris Remacle and Gary and Lynn Rehder and Gary Riener; maternal great-grandmother Joanne Sonnen and paternal great-grandmother Stella Harman. He leaves behind many friends and family who knew his love and generosity. May you all know how much he loved all of you.

The family asks that contributions be made to the Wind River Cougars Football Team. His goal was always to come back and help build the program by coaching his younger brother and upgrading their equipment to be safer for the athletes.