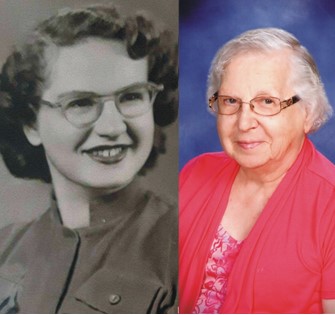 Guestbook 14
After two battles of breast cancer, Mary Ursula Rohrbacher, 86, of Riverton, Wyoming passed away on Saturday, October 24, 2020 at the Help for Hospice Home in Riverton with her family by her side. Mary asked that people wear bright colors to her service and remember her with laughter. A rosary will be recited at 7:00 p.m., Thursday, October 29, 2020 at the Saint Margaret’s Catholic Church in Riverton, Wyoming. A funeral mass will be held at 10:00 a.m., Friday, October 30, 2020. at St. Margaret’s Catholic Gymnasium in Riverton, Wyoming with Father Louis Shea officiating. Private family burial will take place in Hudson, WY on Saturday morning, October 31, 2020.

She married the late William John Rohrbacher, JR on July 13, 1957 in Bellevue, Ohio. After marriage they owned and operated a milk dairy farm in Bellevue, Ohio. They continued to operate the dairy until their daughter, who was born with Down syndrome, believed would fare better in a dryer climate. In 1962 they moved to Fremont County, Wyoming where Mary was employed for 21 years for Northern Utilities in Riverton and was a beloved waitress for Svilar’s Restaurant in Hudson. She retired from work in 1995.

She was a long-time member of the Church of Ascension in Hudson and after moving to Riverton she started attending Saint Margaret’s Catholic Church. As long as she was able she served communion to the home bound members of the church and attended church in Riverton on a regular basis. Mary had a passion for the children at St. Margaret’s School in Riverton. She enjoyed assisting their fund raising efforts every year.

She enjoyed cooking, sewing, quilting and spending time with friends and family. More times than not she had guests at her kitchen table for dinner. She cherished having families and friends of her sons sitting at the kitchen table eating dinner. She relished going to all her son’s and grandchildren sporting events. In 1984 after surviving a difficult battle with breast cancer, she became a strong advocate for raising funds for cancer awareness and research. She continued these efforts through the mid 1990’s. In 1981 she was a Charter Member of the Hudson Ladies Auxiliary for Veterans of Foreign Wars. She continued to serve numerous years supporting the missions of the Frank Homec 4799 VFW post.

She was preceded in death by her parents; daughter Elaine, son Thomas; and brothers Martin, Francis, and Louis.

In lieu of flowers, Memorials in Mary’s name may be made to St. Margaret’s Catholic School or Help for Health Hospice Center in care of Davis Funeral Home, 2203 West Main Street, Riverton, Wyoming 82501.