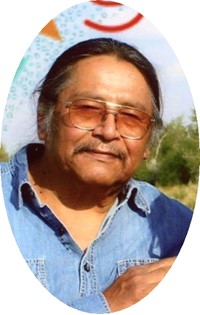 Wilbur Paul Antelope was born on September 23, 1958 in Riverton, WY to Stewart and Doris (Antelope) Oldman. He was a member of the Northern Arapaho Tribe. His native name was Eagle Man, which was passed down to him by his Grandpa James Washington. He received his high school diploma from Arapaho High School in Centennial, CO. He was recognized with an award for drawing the school mascot, The Spirit of the Arapaho Warrior, and received an honorary Art diploma.

On December 2, 1981 Wilbur married Antonia Lujan in Riverton, WY. They were married for over 38 years and had a large family they raised on the Wind River Reservation.

Wilbur was a traditional man that helped the people through his traditional healing ways. He liked to attend Peyote Meeting’s and Sweats regularly.

When he was younger he played basketball and loved it. His main enjoyment was doing artwork for many different groups. His artwork provided for him and his family, being able to do what he enjoyed as a business was a blessing.