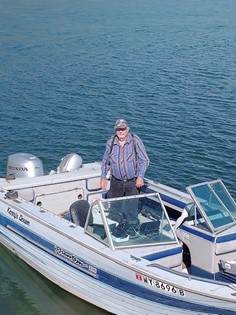 Kenneth Glen Dickinson was born in Riverton, WY to Albert and Lois (Tyrey) Dickinson on June 4, 1947. He was the tenth child out of eleven children and the only survivor left. He attended grade school through eighth grade at the Arapahoe schools and graduated from Riverton High School with the class of 1966.

After high school, Ken went to Gillette, WY to work for his brother, Jerry for two years before returning to Riverton and going to work in the Gas Hills Uranium mines for the next 18 years.

On June 6, 1969 he married Marilyn M. Sanders in Riverton, WY. They made Riverton their forever home. All three of their children, Leith, Darin and Deona were raised in Riverton. They celebrated 51 years together this last June.

Kenny as his family called him, chaperoned at the 4-H camps and State Fairs for many years. He dedicated his time to Fremont County 4-H activities including taking kids to Bull Lake every summer to fish. Kenny enjoyed fishing and loved to teach the kids how to relax and have fun. Another one of his favorite things was to go the Trailhead every morning for coffee and then take coffee to the Wind River Rehabilitation and Wellness Center. He did this seven days a week for over 22 years. The patients looked forward to his morning visits, coffee, and especially his hugs. The Wyoming Homemakers awarded him for being an Unsung Hero for dedication to people of all ages.

Kenny lived for fishing. Bull Lake was the only place to fish according to him. He fished two to three times a week and anything over three times he considered “overtime”. He lost his fishing buddy, Bob Mayo, this last spring, together they fished for over 23 years. He would fish with anyone that was willing to go, he was always ready.