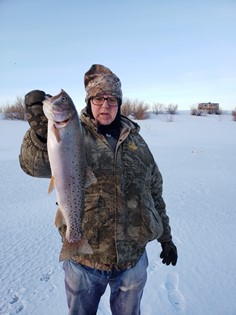 Guestbook 16
A Celebration of Life for Tedd E. Allen, 72, will be held at 2:00 p.m., Friday, November 27, 2020 in the Fremont Center at the Fairgrounds. Cremation has taken place. Mr. Allen passed away on Friday, November 6, 2020 at Sagewest Hospital in Lander, Wyoming.

Tedd E. Allen was born on November 26, 1947, in Durango, Colorado, son of James and Hazel Mardell (Evett) Allen. He grew up in the Durango – Mancos area before the family moved to the Morton, Wyoming area. Tedd attended Morton High School where he graduated in 1966. He then went on to pursue a degree in teaching at Chadron State in Nebraska.

Tedd is very well known for his laughter and sense of humor. He enjoyed hunting, fishing, visiting with anyone and everyone, spending time with his family and friends, and of course being out in the field in his tractor. Tedd was an active member in the First Baptist Church in Riverton, Wy.

Mr. Allen was preceded in death by his parents and nephew Tim Lange.