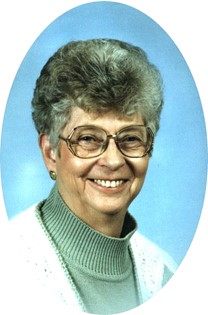 Guestbook 2
Memorial services for Eileen E. Moon of Riverton will be held at 11 a.m. on Monday, Nov. 17, at St. John Lutheran Church in Riverton. Mrs. Moon died on Wednesday, Oct. 29, 2008 at the Wyoming Medical Center in Casper, following many years of health problems. She was 77 years old. Eileen E. Ronneker was born in Bruel, Neb., on March 7, 1931, to Henry Ronneker and Margaret (Dykman) Ronneker. She was graduated from Bayard High School in 1949. On Dec. 29, 1951 she married William Wayne Moon in Harrisburg, Neb. Soon after, they moved to Wyoming, where their two children were born. Mrs. Moon had lived in Riverton for many years and was a long-time member of St. John Lutheran Church, where she was active in the Altar Guild. She had worked as a waitress, and for the Wyoming Activities Association. Her family said Mrs. Moon enjoyed sewing, cooking, traveling, taking care of her home, going to church, and spending time with her family and many friends. She was preceded in death by her parents, Margaret McMaster and Henry Ronneker; brothers, Lawrence and Lester Ronnecker; sisters, Leona Foss and Marian Walters. Among her survivors are her husband, Bill; son, James Moon; daughter, Linda Moon; grandson, Justin Moon, all of Riverton; her sister, Beverly Costello; many nieces and nephews. On-line obituaries are available and condolences for the family may be made at: thedavisfuneralhome.com Services are under the direction of the Davis Funeral Home of Riverton.