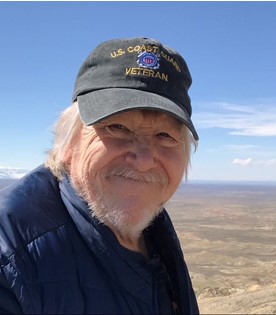 David Martin Ruble was born on May 15, 1946 in Denver, CO to Fredrick James and Jemima Irene (Martin) Ruble. He grew up in Westminster, CO and graduated from the Westminster High School.

After high school he entered the U.S. Coast Guard. He served during the Vietnam War and was honorably discharged. He returned to the Denver, CO area where he lived for over 50 years. He was very proud of his military service and was an active member of the American Legion.

Dave was a strong Christian believer and studied the Bible and shared his testimony with others. He was a member of the United Baptist Church in Riverton.

On August 28, 1982 he married Nancy Ellen Eller in Denver, CO. They celebrated their 38th anniversary this year.

He worked in the construction industry as a carpenter building homes but he considered himself an artist producing numerous watercolor paintings as well as chainsaw sculptures.

Dave moved to Riverton, WY 24 years ago. He was a social butterfly and enjoyed time spent with his family and friends.

He was proceeded in death by his parents, Fredrick and Jemima Ruble; and brother, Jim Ruble.

On-line condolences may be made to the family at www.TheDavisFuneralHome.com. Memorials may be made to donor’s choice in care of Davis Funeral Home, 2203 West Main Street, Riverton, WY 82501.