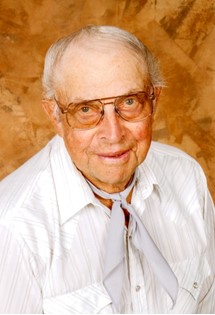 Guestbook 18
Albert “Jiggs” Foster Black, III joined his parents Albert Foster Black, II and Helen Delia Hart Black and brother Robert Black on the family farm in Lake County, Franklin Township, South Dakota on November 17, 1931. Jiggs firmly believed in the plan of salvation and was a member of Sunnyside Church of the Nazarene. On Wednesday, November 25, 2020, he joined his parents, wife, Evelyn, and brother Clinton on the streets of gold, just over the mountain.

“Jiggs” a nickname that stayed with him since the first day of school when a senior boy said “here comes Jiggs” for which he is still known more than by his given name Albert. He attended Franklin Consolidated School all 12 years, receiving his High School Diploma from Franklin. He helped on the family farm until he married Evelyn Klamm on November 17, 1949.

Jiggs and Evelyn continued farming in South Dakota until March of 1960 when they decided to sell everything that wouldn’t fit in a two wheel trailer. The first stop was to visit Rev. Bob and Dorothy Manley who was a former pastor in Madison, South Dakota where Rev. Manley tried his hardest to find Jiggs a job so we would stay. However, that was not to be as we traveled on to Salmon, Idaho where Jiggs had applied for a job, however that position had been filled. We pulled off the road and tried to decide what to do next, Coeur D’ Alene, Idaho was the next stop. It was Wednesday evening, and usual it was prayer meeting night at the Nazarene Church, so we attended. Jiggs told them he was looking for work and was told to come to the creamery the next morning. He was hired immediately and informed Evelyn he had found a job for her also!

In 1960 Jiggs and Evelyn purchased a farm near Pavillion, WY, residing there until the fall of 1966 and returning the Spring of 1969 following his wife’s graduation from Northwest Nazarene College in Nampa, Idaho.

Jiggs was a “Jack of Many Trades.” Doing everything possible to make a living for his family. From farming to bottling milk and packaging ice cream, to sacking sugar on the midnight shift, to janitor at Pavillion School, construction worker for Gilpatrick Construction, truck driver for Osborn Trucking to Guide and Outfitter.

Jiggs was addicted to outfitting while living in Coeur D’ Alene, Idaho, working as a guide for an outfitter on the St. Joe River in Northern Idaho. He also guided for the Heart Six Guest Ranch near Moran, Wyoming and Lava Creek Outfitters. Jiggs later owned his own Outfitting Business near Brooks Lake, which he operated for over 30 years.

He has been awarded a Degree of Honorary Chapter Farmer of Outstanding Service to Future Farmers of America; received a plaque for the best booth at the 23rd Annual Sports Vacation and Boat Show in Ft. Wayne, Indiana; A certification of Appreciation for his contribution to the Teton Wilderness Task Force Trip and Commitment to the Wilderness planning effort on the Bridger-Teton National Forest; received the 2nd Annual Sportsman Hero Award from sportsman for Fish and Wildlife on February 26, 2005, was named Outfitter of the Year Award on the Shoshone National Forest in 1999.

Jiggs served on the Sunnyside Church of the Nazarene Board as a Trustee and sand in the choir. He served as Treasurer of the Dubois Outfitters Association for two years. He served on the Bridger-Teton National Forest Wilderness Task Force Committee; three terms on the Fremont County Natural Resource Planning Committee, and was a member of NRA. Jiggs also served as president of the Fremont County Sportsman for Fish and Wildlife for three years.

His interests were farming, guiding and outfitting, mountains, horses and horseback riding, being around people loved to talk politics, attend machinery and livestock sales, cattle, family including children, grandchildren, and great grandchildren. Serving the Lord was his priority studying the Bible, visiting over a cup of coffee, and casual reading.

Jiggs was thankful for the ability to the things he did and often said, “I don’t know what I would do if I didn’t have something to take care of.”

He was preceded in death by his parents, brother, Clinton Black, and wife of 66 years, Evelyn.

Memorial services will be held at 11:00 am on Saturday, December 19, 2020 at Sunnyside Church of the Nazarene.

Memorials may be made to Nazarene Compassionate Ministries in care of Sunnyside Church. of Nazarene.