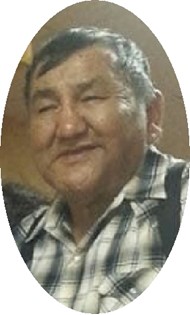 He was born on June 18, 1953, in Fort Washakie, Wyoming, son of Robert A. Bell and Mary Christine Shakespeare. He graduated from the Wyoming Indian High School in 1974 and lived in Ethete most of his life. He was raised by his grandparents West and Elizabeth Shakespeare with the help of his Uncles and Aunts.

He married Rita Black 1984 in Fort Washakie, WY and lived in the Mill Creek housing area for over 30 years, many people teased him about being Mayor of the village.

In his younger years Cedric worked at the Arapaho Ranch cowboying. After having a family of his own, He worked in security for over 20 years at Northern Arapaho Housing and the Wyoming Indian High Schools.

He was one of his family’s biggest supporters, attending all his children’s activities, then his grandchildren’s basketball games, rodeo and other sporting events. He was known to tease all the kids to behave and was there to cheer them on as well.

Mr. Shakespeare was a baptized member of the Catholic faith.