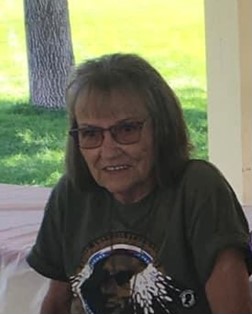 Guestbook 0
Joyce LaRee Sherd (78) died December 15, 2020 at the Hospice Home in Riverton, Wyoming. She was born in Ogden, Utah on November 8, 1942. Her father and mother were in Ogden at that time because her father was working at a munitions plant.

She attended Morton High School. She married Lee Martinez in 1959. They had four children: Eulalio (Chico), Leandro (Deano), John Paul, and Troy. Joyce learned to cook Mexican food from her mother in law Mary, and used those skills throughout her life. She was later divorced and supported her four boys as a short-order cook and bartender.

In May of 1984, she married Charles Sherd, and together they had many adventures. She was a cook for a wagon train that helped troubled youth from Arizona to Montana. They also worked on several ranches in Wyoming together. More than a few times, she had baby calves in her kitchen, and even an orphaned baby pronghorn.

Joyce loved bowling and for many years bowled for the Lander Valley Bowling League. For a time, she was captain of the league, and her team qualified to go to nationals. Many of her team-mates and friends remember her as a little spitfire with a big heart.

Joyce was extremely talented at crochet and cross-stitch. She made many beautiful things that she shared with her friends and family. She also had a green thumb and loved growing plants. From indoor plants to her huge gardens, everything grew beautifully when Joyce took care of it.

Family was Joyce’s sunrise and sunset. She fiercely loved her large family and always spoke of where they were and the accomplishments of her numerous grandchildren.

Joyce was preceded in death by her husband Charles Sherd, parents Jack and Dorothy Raymond, her son Eulalio “Chico” Martinez, and her grandchildren Kayla and Kota Martinez